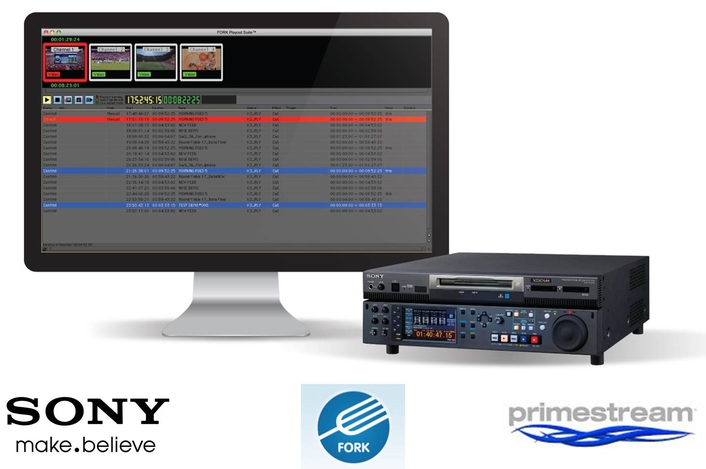 "Sony is dominating the broadcast industry with the XDCAM Station," said Primestream CEO Claudio Lisman. "Sony's leading-edge cameras and the FORK Production Suite together will spawn a new generation of HDTV file-based workflows and production automation. We are honored to be working with the Sony team to bring new solutions to market that enables greater control, speed, and flexibility."

Broadcasters often use XDCAM Station as an ingest gateway for SxS memory card and Professional Disc™ media, as well as on-location for live applications and material-sharing between camera operators and production staff. Once ingested to the XDCAM Station's internal storage, clips also become available via Ethernet to the FORK MAM platform, and vice versa. Content from any video source can flow through the unit's HD-SDI inputs and be recorded onto the internal hard disk using the Sony XDCAM HD 4:2:2 codec.

Any clip stored on the hard disk — whether transferred from memory card, disc, or an external system — can be played out from the HD-SDI output, either manually or as a scheduled, automated action from FORK. The system can also play out clips as part of a playlist, either under manual operation using the On-Air Control feature or as part of a 24/7 scheduled playlist. With FORK, XDCAM Station is capable of handling all operations simultaneously.

About Sony® Corporation
Sony® Corporation is a leading manufacturer of audio, video, game, communications, key device, and information technology products for the consumer and professional markets. With its music, pictures, computer entertainment, and online businesses, Sony is uniquely positioned to be the leading electronics and entertainment company in the world. Sony recorded consolidated annual sales of approximately $87 billion for the fiscal year ended March 31, 2011.