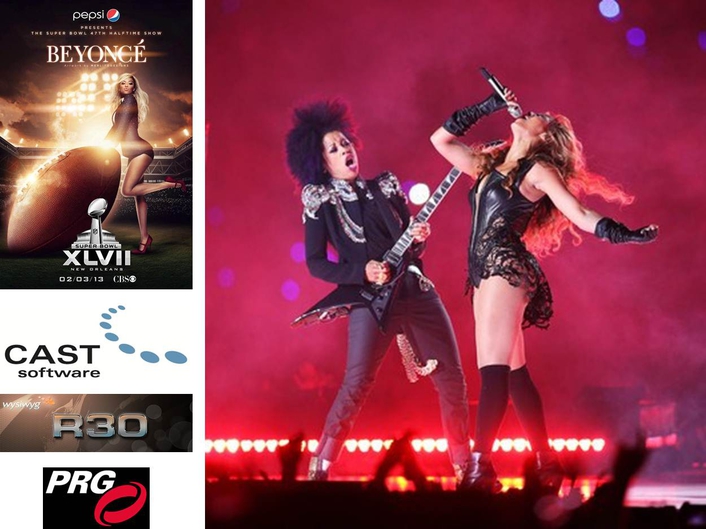 Production giant puts increasing importance on CAST's pre-visualisation suite for the design of spectacular displays
Leading entertainment technology firm PRG (Production Resource Group) has stepped up its use of CAST Software's wysiwyg in the programming of world-class productions, among them, the recent Superbowl XLVII Halftime Show.

R&B star Beyoncé's performance for the show was watched by over 70,000 people at the New Orleans Superdome and broadcast to 108m viewers, with its breathtaking visual design by Al Gurdon, known for his work with Madonna and The Who. It was Gurdon's fourth year on the Superbowl and the fifth for wysiwyg, however, this year, around 90 per cent of the design was programmed virtually using the latest release of the suite, R30, more than a month in advance of the show, at PRG's purpose-built pre-visualisation studio in London. Lighting Director Rich Gorrod worked with Gurdon to design a system in AutoCAD, before uploading it to wysiwyg with the help of previz expert, Chris Burnage, and patching the show with programmer Michael “Oz” Owen, on a PRG V676 console.

wysiwyg R30 is unique among industry-purpose graphic applications, because it allows lighting designers to select the specific fixtures they plan to use (from a huge library that includes truss and gobos) and position them precisely, for a pre-visualisation of the design which is absolutely faithful to the real thing. What the designer sees on-screen is exactly what they will get on the day of the event, lending wysiwyg its name – an acronym of 'What You See Is What You Get'.

“This year we spent a lot of time programming at the PRG offices in London before we actually went out on site,” recalls Gorrod, “so we had a very good idea of what it was going to look like when we got to New Orleans. A lot of the other shows we do are not so organised, so we end up doing a lot of programming onsite, but with shows like the Superbowl, it's possible to sit in a studio somewhere and plot most of it on wysiwyg.”

For the first time this year, after completing most of the wysiwyg plot in London, Gorrod, together with Owen and Gurdon, took the system to New York and set up at the Alvin Ailey dance studios where Beyoncé was rehearsing, affording the artist and her crew an advance preview of the lighting design before they even left for New Orleans. Beyoncé had requested the presence of Owen and Gurdon during rehearsals, so with the help of wysiwyg, the pair were able to reassure the star that their production would be a spectacular complement to her performance. This was also the first year that wyg was taken to the actual venue, for fine-tuning of the pre-visualisation right up the 11th hour.

“wysiwyg allowed us to do a lot of pre-programming with the music, in advance of having the rig,” comments Gurdon. “We also took it onsite because we had very limited access to the set on the field, so it meant that we could programme virtually to make up for that.”

Owen continues: “Much of the show this year came together a little later than usual, so for the first time we took the wyg system to the venue and set it up in our lighting office portacabin. Chris and Richie had designed such an accurate model that most of the focuses were close enough to work straight away in rehearsals. The position – and even the framing and zoom parameters in the VL3500 spot key lights – would only need a quick tweak. This all saved a lot of the very limited time, allowing me to focus on the notes flying in from all directions!”

“The wysiwyg system was a big step forward this year, especially in terms of speed,” he adds. “For the first time it allowed us to visualise the entire show on one machine, with pretty much real time response.”

Owen, Gorrod and Burnage all note that wysiwyg has become an increasingly important graphic application tool and established itself as an intrinsic part of their productions. While only a few years ago they were hesitant to employ the software in their approach, they now admit that they would struggle without it, after recent releases have seen wyg develop into a crucial stage of the design process for heavily pre-programmed shows such as the Superbowl and Eurovision.

“It was very hard to do this kind of show before wysiwyg,” says Gorrod, “so we've really come to rely on it. Five or six years ago I would ask Al [Gurdon] if he wanted to use wysiwyg and he wouldn't be so keen, but now he really realises the importance of it. And because of the improvements CAST has made, in recent years it's become much more user-friendly and much more responsive.”

“We've always used it for big shows and people have always been impressed, but recently we've managed to get it up to realtime standards of speed,” Burnage adds, “and when you've got this amount of fixtures, that's really quite a difficult thing to achieve. It's also very accurate – after Superbowl I got Oz to send me back the V676 show file and it matched up perfectly with the wysiwyg file. I was going through the cues and all the lights were in the right places; they were hitting the right people at the right time.” 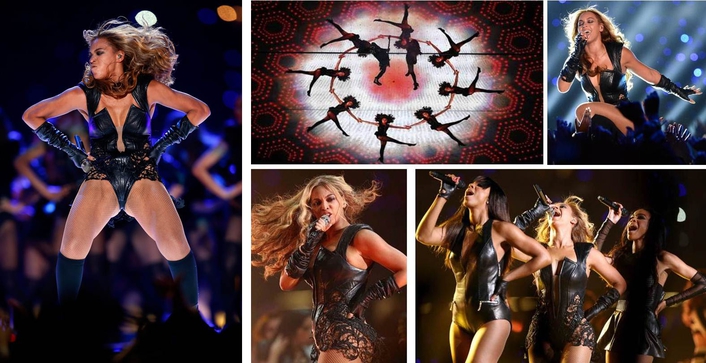 This is no small feat for wysiwyg when you consider that PRG's lighting arsenal comprised 671 LED fixtures, while Gurdon’s design called for 200 automated lights, including 160 Clay Paky Sharpys and 53 Atomic Strobes.

“The performance of wysiwyg now is quite outstanding,” concludes Burnage.

wysiwyg R30 is available now from the Members Only Area of the CAST website: www.cast-soft.com, where a demo version, comprehensive product information, and a showcase of the breadth of projects on which wysiwyg is pivotal, are also available. New releases are free for members.