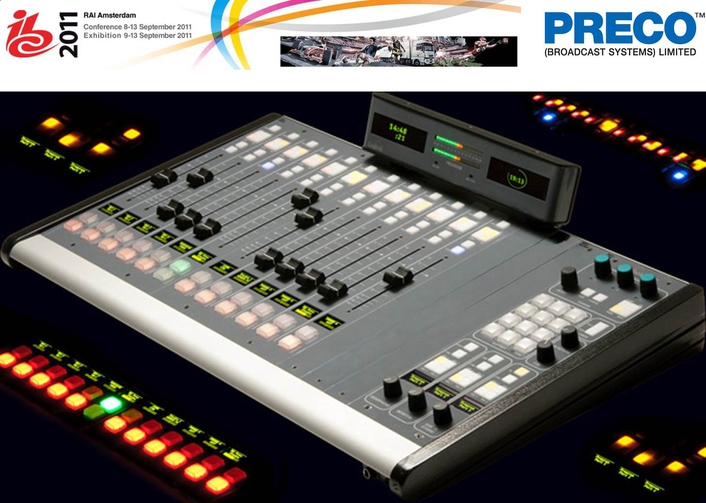 IBC2011 sees the European launch of the Logitek ROC audio control console on the Preco stand, E49 in Hall 8
Available in six, 12, 18 and 24 fader configurations, the ROC console is housed in a desktop or tabletop enclosure allowing easy integration into permanent or temporary studios. The control surface includes high quality 100 millimetre long-throw Penny & Giles faders, OLED source indicators and meters, and a suite of controls to maximise the power of Logitek’s JetStream audio over IP platform.

“The ROC is a modular system designed for fast and easy operation during live programme production,” explains Preco’s Director of Engineering and Technology, James Thomas. “The console sits directly on an existing worksurface so no carpentry is required during installation. An exceptionally durable reverse-printed overlay surface ensures that none of the printing will wear off though operational abrasion. The ROC is exactly what the industry needs at a time when everyone in broadcasting is looking for maximum operational efficiency.”

ROC fader modules include user-definable 16-character source labels on bright wide-angle displays. The labels support Unicode characters including Chinese and Kanji. Bus buttons assign programme plus three auxiliary sends per fader. Each fader has a change button and cue button plus a softkey button that can be used for talkback or intercom. The console includes a built-in cue speaker and front-rail headphone monitor jacks (standard and miniature).

The ROC’s monitor control module has a central selector for accessing sources, compression settings and EQ. Three assignable knobs are available for use with the included vScreen PC application for VGA meter bridges. 12 configurable softkeys  can be used to assign quick routes or any other function. Control buttons can be set to any of 256 colours via software. Preset buttons for headphones, control room, or guest/studio monitoring enable operators to switch quickly between four sources. An unlimited number of sources can be monitored using the change button and select knob. Timer control buttons, talkback return and cue level knobs are also incorporated.

An optional meter bridge displays programme levels and switched source levels with dual OLED screens for timers, clock, profanity delay indication or user-defined text. A tri-colour stereo LED bargraph meter simultaneously displays peak and average metering. TFT screens on each side of the LED bargraph can display auxillary buses, studio monitors, inputs, or any other mix. Two tally LEDs are also provided, one to indicate that the studio is on air and the other to show that the microphone is on or that the programme is live in the adjacent studio.