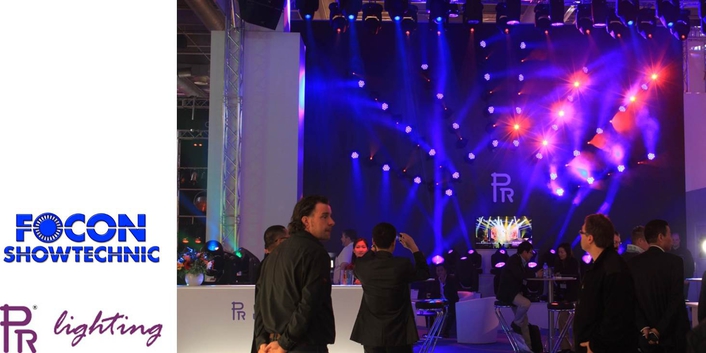 .
PR Lighting provided a powerful inventory of new products, as well as support personnel, for this year’s Prolight+Sound Show in Germany, occupying a self-contained wing of the giant stand operated by their German distributor Focon Showtechnic.

Having announced a new portfolio of seven products on the eve of the show — with applications ranging from studio and photographic markets to the more traditional show sectors — it was left to Focon’s Frank Alofs to design a dynamic back wall to show off the powerful PR 5000s, mounted on the plinth, while XR200 and XR300 Beams, housing the Platinum 5R and Platinum 15R respectively, fired out from the back wall. Numerous XLED 336 Beams and XLED 250 Spots were also intermixed in the back wall of the dynamic lightshow.

Elsewhere products such as the new XR230 Spot, with its linear zoom from 3.8°-42°, and the compact XR330 which delivers outstanding brightness, were among the highlights, while the LED Studio 3400, equipped with 12 x 15W LED's and with power consumption of just 150W delivers the type of soft light that makes it perfect for studio and photographic use — with two temperatures of 3200K and 5600K. PR Lighting also presented the new XR 1000 moving head, which will exist in Spot and Beam versions, — and other new items, such as the XR 130 Spot, XRLED 300 Spot and Car Show Lamp.

But the highlight was probably the new XLED 2007 Beam. This mini unit, weighing just 4.36kg, has all the advantages of the XLED 336 but in addition can rotate endlessly (as well as operate in sound to light mode). The fixture contains seven of the Osram Ostar light sources, rated at 15W each, with 4 in 1 LED colour mixing. 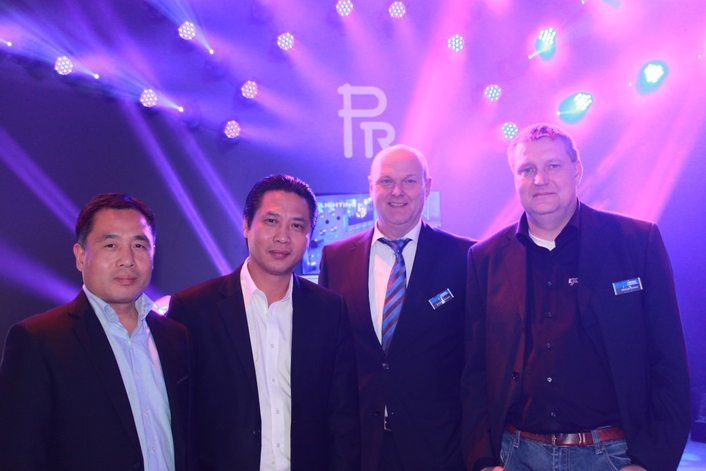 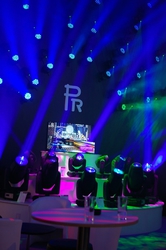 “The market acceptance of PR Lighting in Germany is increasing all the time as the partnership between our two companies grows steadily closer,” he said. “Our mission is to prove to our customers that PR Lighting is comparable with other professional moving light and LED manufacturers. And as customers search for high quality lighting at reasonable prices, PR Lighting continually meets both criteria.”

“With so many new products we believe this will open up new doors in Germany and with these we will be able to satisfy users’ requirements,” he concluded.