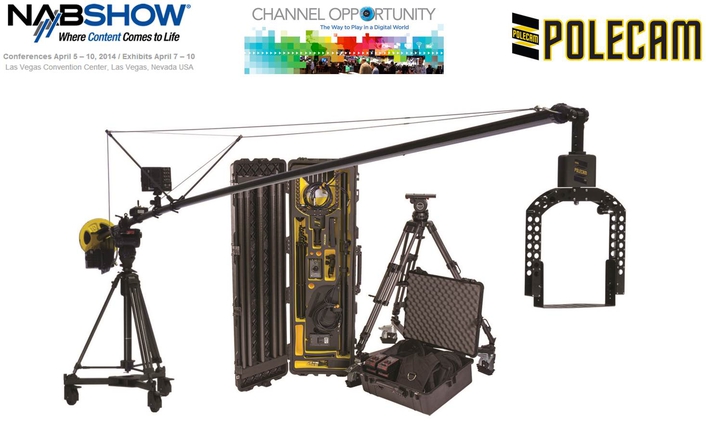 See the Polecam rigs and the Polecam team on their booth, #C9908 at NAB 2014
Polecam Systems will launch new products at NAB 2014 including the Polecam Professional Pack, PPP, providing an enhanced ‘out of the box’ solution for those looking to hit the ground running with a camera-ready highly specified and flight cased Polecam bundle at a professional level.

The PPP is developed from the existing and dominant market leading PSP+ package. Like the PSP+, the PPP is modular and provides a great platform for cameras such as RED, Canon, Panasonic. Sony, and the range of specialist minicams (Toshiba, Panasonic, LMC, Camera Corps, IO Industries, Indicam) and lenses (Resolve, Fuji, Theia, Kowa) that Polecam Systems can advise on, and supply.

The Polecam Starter Pack Plus (PSP+) package has been outstandingly successful in making the Polecam system accessible to the creative camera community world wide, with success stories of those already making a name for themselves with new rigs purchased just last year.

If you are still not aware, Polecam is a single operator, lightweight carbon fibre, very portable, very fast, go anywhere remote head camera jib. The system has been enhanced with new powerful remote heads that will allow larger cameras to be mounted, opening up high end broadcast and cinematic possibilities. Take Polecam with you on any shoot and use it to raise production values on the go. 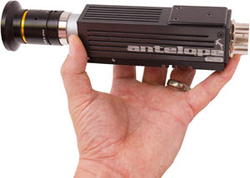 Other new products on show:

- the Antelope PICO high speed minicam: Polecam and LMC have teamed up as partners to bring stunning super slow motion via a minicam that will mount on (or off)  Polecam to give  a new POV viewing experience for broadcast, natural history, sports coverage and analysis, scientific, industrial and medical use and more. Simultaneous record and instant playback with up to 4 triggered events.

- the Polecam Grip Relocator package for the Canon C300 camera, very popular with Polecam owners and proving to be the perfect partner for a Polecam with the Long Head. The product enhances that partnership by enabling the Polecam operator to control the C300 remotely from their natural position when operating the rig.

- the Polecam Remote Control Panel RC200: Polecam has always been synonymous with specialist minicams and lenses, and the range continues to expand with many used in applications where remote control is essential, like Outside Broadcasts. Polecam gets ahead of the game with this new product which now includes the protocol for the IO Industries Flare Camera enabling remote control of up to 6 different cameras from the one panel.

- the Polecam Long Head Weather Cover: Polecam rigs are designed to operate indoors or out, but by its nature, our adventurous owner ops find themselves in all types of bizarre situations such as jungles, swamps, or even UK weather, to name but a few. Polecam itself will cope with this, but the camera can be the weak link. Polecam now offers the Long Head Cover, effective in keeping your camera dry, cosy and debris free.

Present on the booth will be Steffan Hewitt, designer of Polecam, along with Stephen Rutherford from Polecam UK, Perry Drogo and Anthony Magliocco from TECADS the  Americas distributor, along with their visiting reps. Come along, try Polecam yourself, and feel the magic.

The company has continued to develop and refine Polecam, never standing still, and today Polecam Systems offers a wide choice of ways to own a rig, from the Polecam Starter Pack, an entry level configuration which, using the Long Head, will take a variety of cameras such as minicams, D-SLRs, the Canon C300, Sony Nex 700, Black Magic Design Cinema camera or RED, and now, at the higher end of the range the new Polecam Professional Pack PPP.
When configured as 7th Heaven, the full Polecam rig has an extended reach of an amazing 8m/26' and when fitted with a minicam you can get right in close to where the action is, giving a unique creative viewpoint to your productions.

There is a whole range of mini HD cameras, other specialised cameras, heads, accessories, recorders, not to mention 3D, underwater add-ons and Extreme SloMo too.
Polecam will change the way you shoot and the way you think about shooting.