Polecam FishFace & PICO partner for spectacular new aquatic sports views
Polecam has taken its partnership with the Antelope PICO Ultra Slow Motion minicam a further leap forward by putting the camera into a re-designed FishFace waterproof housing on the end of a Polecam remote head lightweight jib arm. This combination now allows Polecam to shoot aquatic sports in HD streaming Ultra Slow Motion from viewpoints above and below water level, demonstrating new and spectacular shots and moves not seen before. This opens up new opportunities not only for sports viewing but also for natural history and industrial applications too.

Additionally this new functionality offers an important tool for the analysis of swimming, diving and other aquatic sports.

Polecam Systems took the kit to the Luton Active Pool to test the FishFace / PICO system and to record Ultra-Motion of swimmers and divers."The aim of this was two-fold," said Steffan Hewitt, owner of Polecam Systems. "Firstly to validate the system and generate footage for future events, and secondly as a training tool for the coaches." 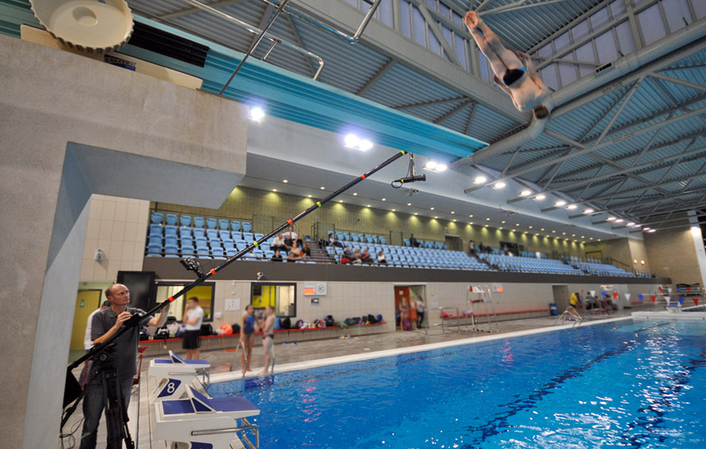 The FishFace system was developed at the request of Laurie Frost of Camera Corps (a Vitec Videocom company) for the 2000 Sydney Olympics for a new view on swimming and diving. Since then it has become a standard tool for all major aquatic events including the swim section of the Triathlon. Now by adding the Antelope PICO into a re-designed housing to attach to the standard FishFace, ultra-motion shots at 350fps can now be achieved.

"Sport no longer happens without some form of ultra-motion for replays," said David Jenkins, Diving Development Officer for Luton Active, "but for us to be able to replay a shot instantly and then play back on a 50" monitor poolside is an invaluable training tool and we look forward to using it again."

"Instant analysis, but also having this high quality full HD footage for further analysis on my laptop after the session is also priceless" said Peter Woodbridge, Swimming Development Officer for Luton Active. "Playing back shots poolside immediately after the event is so much more powerful than the next day. It's fresh, and adjustments can be made immediately. Formula One pit-stops or 50m freestyle sprinters, the benefit is the same." 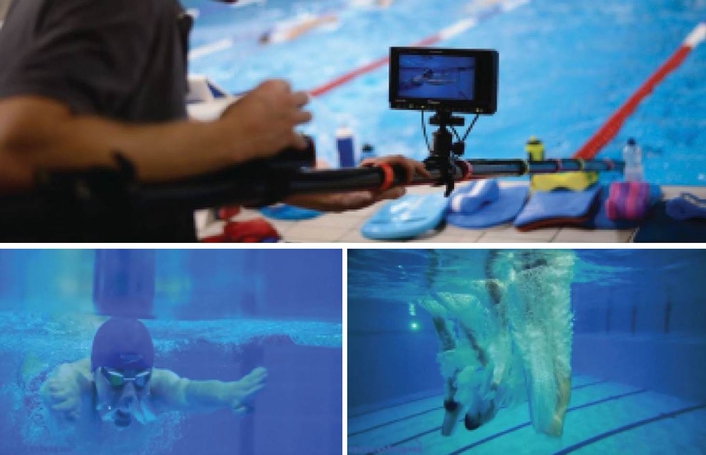 Mark Sallaway, a veteran Polecam/FishFace operator was on hand to run the 3 section (3.5m) Polecam while Steffan piloted the Pico and its instant replays. The Pico was running up to 350fps at full HD. Dan Palfreman, Luton Active Manager was extremely helpful in making this happen as well as all the swimmers and divers.

The company has continued to develop and refine Polecam, never standing still, and today Polecam Systems offers a wide choice of ways to own a rig, from the Polecam Starter Pack, an entry level configuration which, using the Long Head, will take a variety of cameras such as minicams, D-SLRs, the Canon C300, Sony Nex 700, Black Magic Design Cinema camera or RED, and now, at the higher end of the range the new Polecam Professional Pack PPP.When configured as 7th Heaven, the full Polecam rig has an extended reach of 8m/26' and when fitted with a minicam you can get right in close to where the action is, giving a unique creative viewpoint to your productions.

There is a whole range of mini HD cameras, other specialised cameras, heads, accessories, recorders, not to mention 3D, underwater add-ons and Extreme Ultra Motion too.