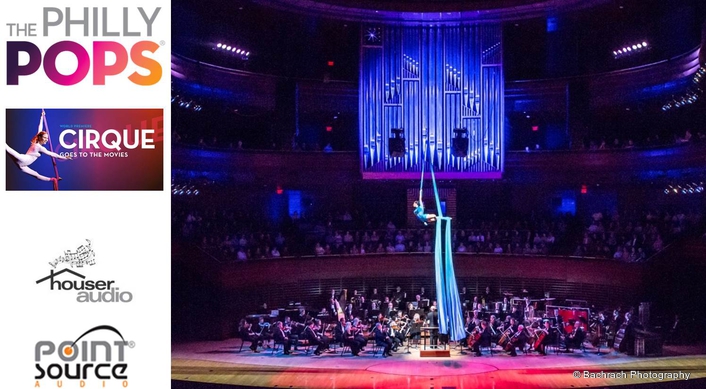 Point Source Audio® (PSA) today revealed that its SERIES8 microphones have been selected for the Philly POPS, the largest standalone POPS orchestra in the United States—entertaining more than 100,000 audience members yearly. Houser Audio, the official audio provider for the Philly POPS picked the CO-8WL omnidirectional lavalier microphone to amplify the string ensemble of the Philly POPS’ 65-piece orchestra.

Houser evaluated the Point Source Audio microphones in side by side recordings with other mics and remarked that he “couldn’t believe his ears.” The natural tone of the mics won him over and he now incorporates the Point Source Audio mics for all the orchestra’s performances. Houser skillfully wires the instruments by adding PSA’s X-CON-EXT, a 2 foot extender cable to the microphones then mounts the XLR connectors to the mic stands.

Point Source Audio President James Lamb commented that “It’s inspiring to hear our customers both validate our microphones’ sonic quality, and discover the exceptional ways they are using them.” Lamb further shared the company’s design strategy behind the replaceable X-Connector on the SERIES8 microphones: “The X-Connector concept gives our customers versatility to lengthen the mic cables or to change terminations instantly—without soldering or a lot of technical know-how.”

The company’s SERIES8 collection of miniature microphones is currently offered in headset, earset and lavalier styles in both omnidirectional and cardioid polar patterns. The company’s latest innovation, EMBRACE™ Microphones, is a patent pending ear-mounted lavalier solution that is turning outdated theatre mic’ing methods on its head.

About the Philly POPS
The Philly POPS, the largest standalone pops orchestra in the United States, delights audiences with the inspired performance of American popular music. Now in its 37th season, the official POPS orchestra of Pennsylvania serves a consistently growing audience of over 100,000 annually. Music Director Michael Krajewski and the 65-piece Philly POPS orchestra keeps listeners tapping their toes to an impressive repertoire of songs from colonial times to the 1920s and up through today’s chart toppers. The Philly POPS performs as a founding resident company of The Kimmel Center for the Performing Arts, and at venues throughout the mid-Atlantic region.

About Houser Audio
Houser Audio was founded in 2004 by Andre Houser to provide an array of audio services including audio production, installation, and a fully equipped 30 x 30 rehearsal facility for visiting artists needing comfort and convenience during their tour in town. Prior to founding the company, Houser graduated from the Institute of Audio Research in New York and also toured with artists such as Earth, Wind and Fire; Brian McKnight, Jill Scott, Cassandra Wilson, Ray Charles, Boney James, Prince and many other jazz legends. In 2008, Houser was specifically requested by then conductor and 2-time award winning pianist Peter Nero to provide audio services to the Philly POPS.

About Point Source Audio
Point Source Audio (@PSA_audio) manufactures and distributes worldwide a unique line of live event technology including their patent-pending comm headset; and their SERIES8 miniature microphones, known for their robust bendable boom and waterproof features, and a winner of the 2014 Best Microphone award. As the Digigram Distributor for the Americas, the world renowned brand of Digigram sound cards, and IP audio and IP video networking technology are also available from Point Source Audio. Founded in 2004, Point Source Audio is headquartered in Petaluma, Calif.