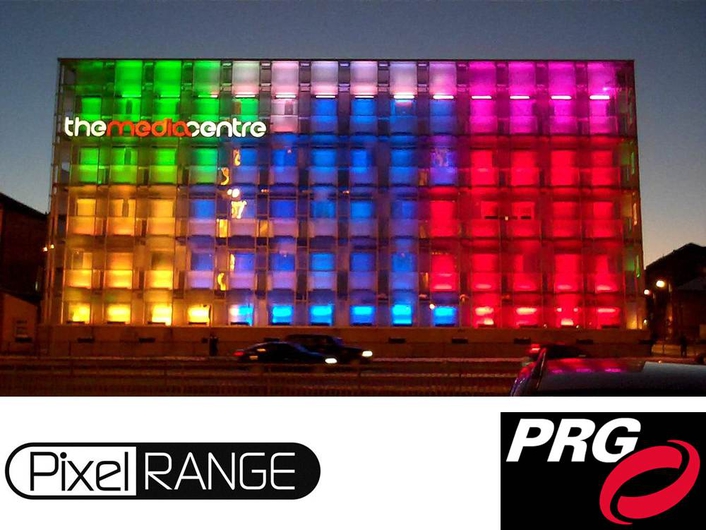 PRG Distribution will act as the Exclusive Master Distributor for the UK, Europe and Russia
PixelRange is delighted to announce that, effective 1st April 2011, PRG Distribution has taken on the role of Exclusive European Distributor for its full range of innovative LED luminaires from PixelRange. Borne out of the James Thomas Engineering Ltd ethos, the PixelRange brand is synonymous with British-built quality, reliability and intensity of colour. The company was one of the earliest pioneers of LED technology bringing influential products such as the PixelPar and the PixelLine 1044 batten to the market.

The appointment coincides with the development of a brand-new line-up of intelligent LED fixtures for immediate launch. The new PixelSmart multi-use luminaire was developed from an idea by International LD Andi Watson. The PixelSmart utilises 12 Cree QUAD RGBW MCE LED's and 13 Cree XPG warm white LED's. It has 61 individually addressable channels allowing creative pixel-mapping via either DMX or Digital Media Server. The PixelSmart is typical of the PixelRange build quality with precision CNC'd construction from solid aluminium billet, proven to withstand the most brutal touring conditions.

Further products will soon be launched into this range based on the same ideology, including the SmartLine range of intelligent battens and PixelLine non-intelligent battens all available in 6ft (with 36 MCE LED's) and 4ft (with 24 MCE LED's) lengths. There are also PixelLine 1 and PixelLine 2 battens at 1ft and 2ft respectively. All battens are based on the Cree LED as featured in the PixelSmart. Completing the range is also another new product which is the QPAR which is a 12 MCE LED fixture to replace the PixelPar.

The move enables James Thomas to put the entire PixelRange portfolio into carefully-chosen, proactive hands where it will receive the most positive sales deployment. The James Thomas truss products are currently unaffected. By separating the two brands in this way the company can fully focus on the future development of the truss technology that will follow in the vein of the newly launched X-Truss – the first fully self-contained, fold-flat truss with the strength and reliability of the much-coveted SuperTruss; and the Lowpro Moving Light Truss.

PixelRange General Manager Paul Young commented, “We have worked long and hard with the very best minds, with the very best ideas, to create the very best products in the known and loved PixelRange package. In PRG Distribution we have the final piece of the puzzle, the very best distributor there is. Their professionalism and ethos is second to none and from my personal experience working with David and his team it is going to be a very pleasing, lengthy and rewarding relationship.”

PRG Distribution will act as the Exclusive Master Distributor for the UK, Europe and Russia. Divisional Director of PRG Distribution, David March comments 'PixelRange has an enviable reputation for innovative and reliable LED products. These new products reinforce this position and we are thrilled to be working with Paul Young, Andy Walters and their dedicated team at PixelRange'.

Recently, the PixelSmart has been road-tested on a number of high-profile events including the Royal Variety Performance with LD Steve Nolan and Operator Tim Routledge as well as tours with LD Andi Watson who is behind the original idea for the PixelSmart.

The new products will be shown at Pro Light and Sound Frankfurt 6th-9th April, on the PRG stand in Hall 11 and in the PRG Festhall; and PLASA Focus Leeds 19th-20th April. At both shows there will be representatives from both PixelRange and PRG Distribution on hand to show the new products.