LED Video Wall Company Enters Pop Market for the First Time
On the heels of their Pop Psychology album release, Neon Trees knew the 2014 tour should be an explosion of psychadelic color to remain equal to the punch of frontman Tyler Glenn’s lyrics. The show would be a theatrical event, and video would play a role in transporting the audience to a world that matched the shiny pop songs that lay emotion and angst out on the line.

Neon Trees Production Manager Mike Bangs’ took a napkin Glenn and the band used to draw out the set and brought it to reality. The clean stage, where every piece of equipment has a purpose, was framed with four 8 foot by 4 foot panels of PixelFLEX FLEXCurtain, with three staggered in the back and the fourth turned on its side in front of a riser to give the illusion of floating band members. Another smaller, non-PixelFLEX hard tile was also used in front of risers to accomplish the “Timothy Leary meets Alice in Wonderland world,” Bangs said. 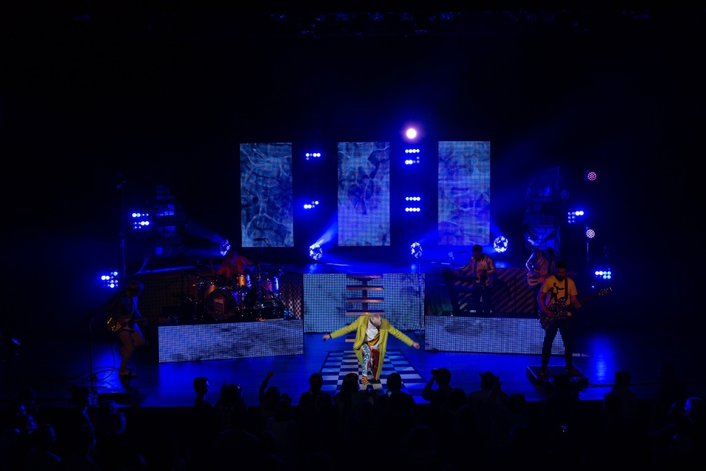 Lighting Director Matt Guminski worked with the team to create original video content full of abstract color and designs to match the dynamic lighting show. The FLEXCurtain isn’t put into use until the fourth song in the show; at that point the audience’s visuals are almost overwhelmed with the pop art surrounding Glenn and the other band members.

“The thing that we didn’t want to do — and the thing that I think we do much differently from any other band — is that most bands above a certain level have video now, but every show that we go to is like watching a band stand in front of a tv” Bangs said. “It’s like you’re watching television with a band in front of it and that was the absolute opposite of the experience we wanted to give.”

The creation of the show into one cohesive setting is what led Neon Trees’ production to be unique in that they had no video director. Guminski created video content and lighting in tandem as there was no way to accomplish the vision separately. There was no IMAG, and no gratuitous video content. Every visual element has a specific purpose. 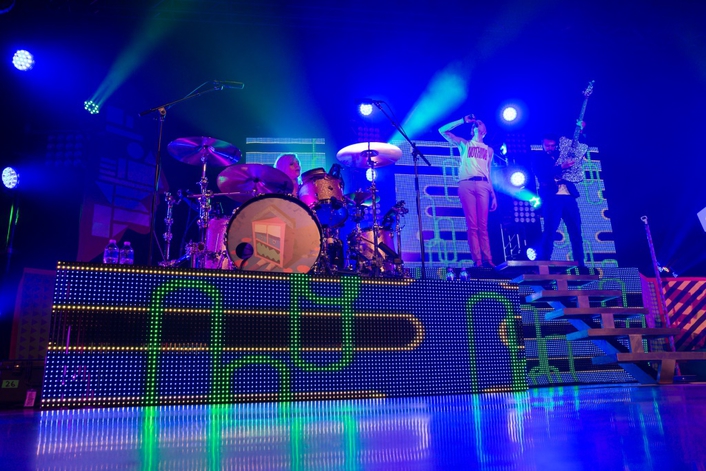 Production had to have the same intentional goal.
“I was asked to provide a video system by the band, but I was under very tight space and weight restrictions,” Bangs said. “PixelFLEX was the only product I could find that would meet all of my requirements.”

The total 128 square feet of FLEXCurtain for Neon Trees fits into a single 2.5 feet wide, 5 feet long, 3 feet tall roadcase, a massive difference in space from other rigid LED tiles. A larger 50 feet tall, 25 feet wide (1250 square feet) FLEXCurtain LED wall packs into nine cases to take up just five feet of truck space, while the same amount in most non-PixelFLEX tiles will pack into more than 24 feet of truck space. The innovation of a flexible video wall allows production teams more options both visually and logistically than previously existed in the LED market.

“It’s very portable and light, and I can put it in any room,” Bangs said. “It’s also scalable so I can move around and adjust it, and I’m not glued to anything. I wanted everything to be ground supported so it could be versatile, and PixelFLEX was the only thing that would let me do that.”

Neon Trees and PixelFLEX will be on tour through September. 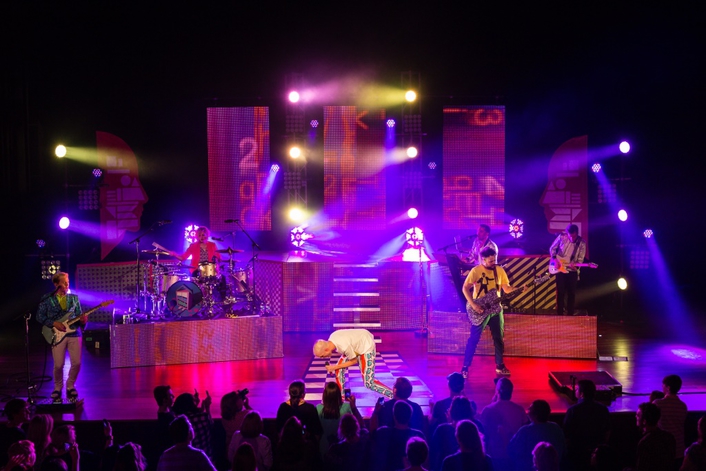