.
Calrec, a leading supplier of audio consoles for on-air and live production, announced that international production powerhouse Pinewood Studios Group has installed an Artemis Beam console in its new 5.1-capable sound-control gallery to mix audio for live and recorded television shows, the first of which was a children's show for BBC.

The sound-control gallery is part of a new television studio facility in Buckinghamshire, England, which includes all new control galleries and equipment. Pinewood produces high-profile TV shows such as "Got To Dance" and "Would I Lie To You" plus world-famous films including the recently released James Bond film, "Skyfall." 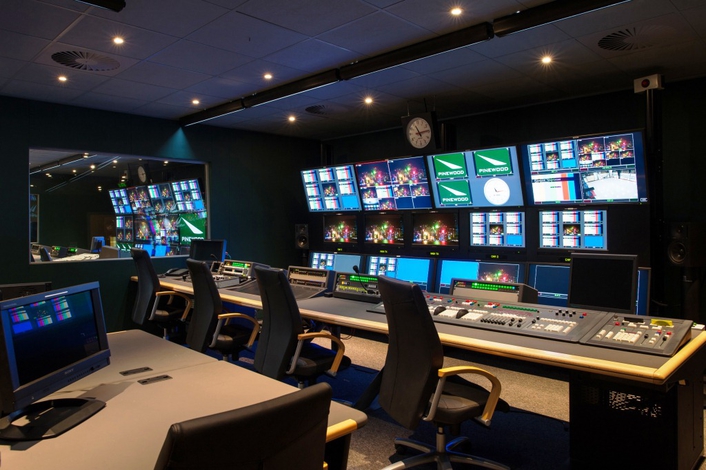 "Our technical team evaluated several consoles in the process of selecting a sound desk for our new TV studios, and preferred the Calrec Artemis," said Pinewood Broadcast Director Paul Darbyshire. "We were looking for a desk that would provide more channels both in and out, along with greater flexibility and ease of programming. With the Artemis we feel we have achieved that and more. It's easy to understand why Calrec is so highly regarded in the broadcast industry."

Darbyshire said the Artemis Beam is more intuitive to use and requires less time to create and recall show memories, which streamlines the production process. The team also appreciates the full redundancy offered by Calrec consoles that has earned them a reputation of being very reliable. This is especially relevant when producing live light entertainment and music shows.

"Not only do many sound supervisors working on shows at Pinewood prefer Calrec consoles, but our production clients also see benefits," Darbyshire said.

About Pinewood Studios Group
The Pinewood Studios Group is a leading provider of TV studio and related services to the global television and film industry. Its U.K.-based Pinewood, Shepperton, and Teddington Studios have been home to some of the most successful television productions ever made.
Pinewood and Teddington have between them five dedicated television studios with HD lines and five broadcast studios, with full production galleries, offices, accommodation, and edit suites. For larger light entertainment formats, Pinewood and Shepperton can offer up to 60,000 sq. ft. of space accommodating large sets and capacity for audiences of more than 1,500.