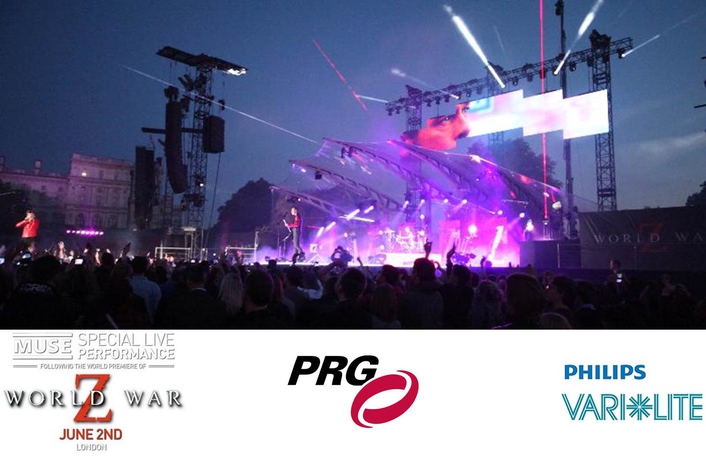 Epic and apocalyptic, Routledge's lighting design not only took care of the stage but the buildings and park surrounding the area to create an eerie, experiential evening of atmospheric entertainment for the 15,000 Muse fans attending.

Routledge - who was the lead lighting programmer for the London Olympics Opening and Closing Ceremonies - specified a massive 100 VL3500 Wash luminaires to wash the full expanse of the Horse Guards Georgian buildings and the audience with intense, bright blasts of colour.

"We positioned the VL3500 washes around the quadrangle, up-lighting the buildings with some of the throws only 2m from the walls," explains Routledge. "I knew I wanted to create something apocalyptic to reflect the theme of the film. The timescale for putting the show together was tight however the grand nature of the setting could not be ignored and so a wish list of equipment came together. I wanted the VL3500 Wash also as they give me a great audience cover - the result was nothing short of epic!"

"The VL3500 Wash is recognised for its smooth, even washes, intense beam, and wide zoom range, says Martin Palmer, Vari-Lite & Showline Product Manager EMEA. "Internal zoomable beam optics and an interchangeable front lens make the fixture an extremely flexible unit. Not only that the Vari-Brite mode means that, from any zoom position, the fixture delivers a tight column of remarkably intense light. The other great thing is that the VL3500 Wash allows users to operate its single lamp at three different wattages via either a control channel setting or a lamp menu option."

The VL3500 Wash and Spot Luminaires were supplied by PRG (Production Resource Group) headed up by account director Mick Healey. Head of production for Live Nation was Steve Nolan of Chromatic with production and site design coordinated and managed by Malcolm Birkett

World War Z, directed by Marc Forster, is scheduled for general release at the end of June.