Trenell's lighting trusses carried a number of LED wash and profile fixtures, peppered at regular intervals with Showline SL NITRO 510s. Although he only used 14 in total he used them in a multiplicity of imaginative ways including full on audience blinders, single snare accents, and flash flares.

"Incredibly, the SL NITRO 510s make it looks like there are at least 100 strobes on stage - not just 14!" explains Trenell. "I'm impressed, you get serious bang for your buck from these fixtures - the output is really impressive and they consume relatively little power."

The SL NITRO 510s feature a tightly packed array of over 1300 high power LEDs," explains Philips Vari-Lite and Showline product manager, EMEA, Martin Palmer. "This ensures maximum output and full-field, even distribution. However what really makes the SL NITRO 510 stand apart from other strobes is the six unique zones of control available on each fixture. This allows for the ultimate in design flexibility, while unique built in chases aid designer creativity and programming simplicity."

"My design aim was to create an intimate, theatre style feel within large arenas," continues Trenell. "However at the same time I wanted to use punchy bursts of light to maximize the high-octane feel of the fast-paced show. The fact that you can daisy-chain the SL NITRO 510s together and utilise the cell control means I could achieve four or five different looks from the units simply and quickly. This is exactly what I look for from fixtures that are built for today's forward-thinking lighting designs - versatility and power from as few units as possible and consuming as little power as possible." 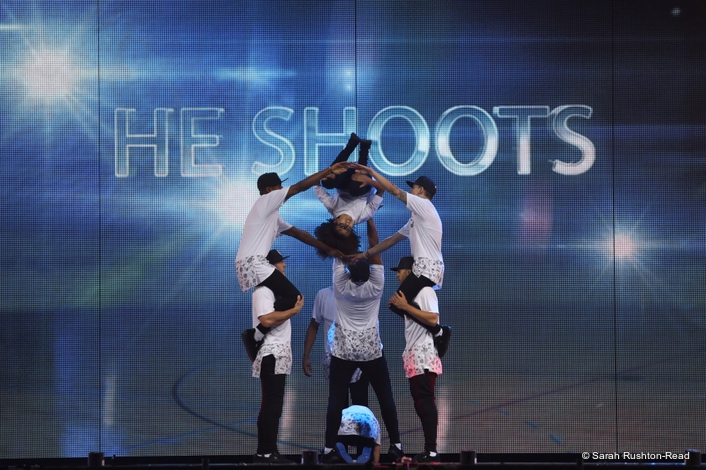 With over 68,000 lumens of output, the SL NITRO 510 rivals conventional strobes and retains dynamic looks, whether washing a stage or pointing directly at an audience.

"Other strobes are just on or off," adds Trenell. "The zone control the SL NITRO 510s offer really makes them stand out from the crowd. Not only that the robust construction means touring with them is easy - we haven't broken a single unit during this tour!"

The Showline standard LCD menu system, continuous-on operation and lower power consumption make the SL NITRO 510 a versatile and valuable strobe addition to any rig and for any application.

A unique quick-connect system allows SL NITRO 510 units to connect together easily, top-to-bottom and / or side-by-side.

The SL NITRO 510s were supplied, along with the rest of the lighting rig, by HSL.

"Simon Stuart of HSL insisted I had a look at the SL NITRO 510s and, having seen them in action, I'm looking forward to using them in much bigger clusters for future arena shows," concludes Trenell.

HSL now has over 100 units and they have all been out on hire since they were purchased. Mike Oates, director at HSL is delighted: "We have been very impressed by this unit and the lighting designers we regularly work with seem to love them. We have been delighted with the outcome of the investment and hope to buy more in future."

Diversity's Limitless tour kicked off in November at Dublin's O2 Arena and travelled to large UK venues such as Liverpool's Echo Arena, Birmingham NIA, and London's O2 in December.