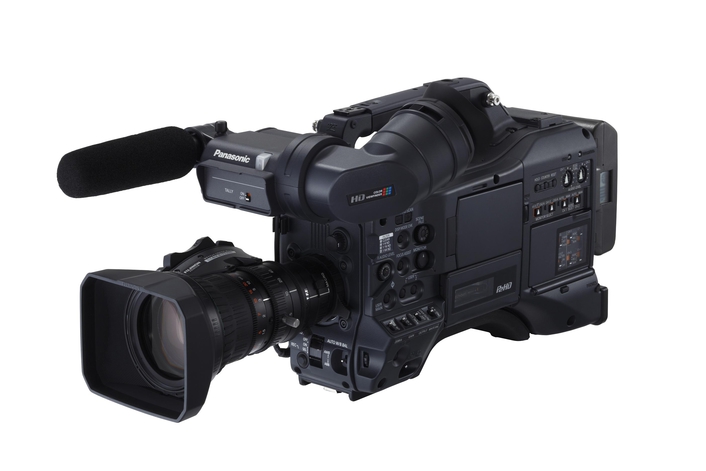 “With a newly-developed U.L.T. imager and 10-bit 4:2:2 recording, the HPX371 is unrivalled in its class for reliable, master-quality production,” said Christian Sokcevic General Manager for Sales & Marketing at Panasonic Broadcast. “Unlike its competition, the HPX371 is a fully-integrated solution that requires no third-party hardware to boost its performance.”

“The market has increasingly recognised that the AVC-Intra codec is the best option for its full-raster, 10-bit, 4:2:2 sampling with none of the inherent compromises of 8-bit, long GOP and 4:2:0 recording,” said Christian Sokcevic. “With the HPX371, professionals can capture and record at quality levels that no other camcorder in this price range can match. And with its affordable studio configuration, the camera offers extraordinary quality and versatility for a broad range of end users and studio production.”

The HPX371 incorporates newly-developed 1/3”, full-HD 2.2 megapixel U.L.T. (Ultra Luminance Technology) 3-MOS imagers and a 20-bit Digital Signal Processor to acquire native 1920 x 1080 resolution images. Rivalling the image quality and sensitivity of ½” imagers, the new U.L.T. sensor results in marked improvements in sensitivity, measured at F10. These high levels of sensitivity and image quality have been achieved with a new high-sensitivity photodiode and low-noise pixel transistor, both based on low-noise analogue process technology. The same levels of sensitivity and image production that characterise the interlace mode are now possible in progressive mode courtesy of Progressive Advanced Processing (P.A.P.), a 3D adaptive processing technology.

For creative flexibility, the HPX371 has variable frame rate recording for creating fast and slow motion effects. In 720p mode, a user can choose from 20 variable frame steps between 12 and 60. The shutter speed can be set between 1/6 sec on the slow end (in 24p mode) and 1/2000 sec on the fast end. Used with the VFR function, this allows the user to create a blurring effect or crystal-clear stop-motion.

The HPX371 comes standard with a Fujinon 17x HD lens and offers the flexibility of interchangeable lenses, including the option of a 1/3” to 2/3” lens adapter, which allows the user to pair the HPX370 with existing 2/3” zoom and prime lenses. The camera is equipped with Chromatic Aberration Compensation (CAC) to maximise lens performance, built-in scan reverse for use with film lenses, a Dynamic Range Stretch (DRS)* function to help compensate for wide variations in lighting, a waveform monitor and vector scope display, and two focus assist functions – a picture expanding function and a focus bar. New advances in the HPX371 include:

Equipped with two P2 card slots, the HPX370 can record for up to 320 minutes in AVC-Intra 100 at 720/24pN, 160 minutes in AVC-Intra 100 1080/24pN and 128 minutes in other HD formats on 64GB cards. The HPX371 offers all the benefits of a faster, file-based P2 HD workflow including such recording features as instant recording start-up, clip thumbnail view for immediate access to video content on all cards, and a host of time-saving recording modes including continuous recording, card slot selection, hot swapping, loop, pre-record (three seconds in HD and seven seconds in SD), one-shot and interval recording. The camera also features an SD memory card slot for saving or loading scene files and user settings, and proxy data recording (optional AJ-YAX800G Proxy Video Encoder Card required) for easy *transmission of dailies over wireless and wired networks.

The HPX371 can also be used as a studio camera. It is equipped with a remote control terminal (RCU) for use with the optional AJ-RC10G Remote Control Unit and compatible studio remote control systems. Panasonic offers a customised studio configuration system for the HPX371, the Camera Studio System, which includes the AG-BS300 base station, AG-EC4 extension control unit (ECU) and AG-CA300 remote control camera adapter.

At eight pounds, the HPX371 offers a well-balanced, low-profile, shoulder-mounted design. All operation switches, volume controls and card slots are on the left side for easier operation. For easy HD viewing, the camera is equipped with a widescreen 1,226,000-dot LCOS colour viewfinder and a widescreen 921,000-dot 3.2-inch LCD colour monitor. Its power consumption is low at only 19 watts.

The HPX371 is available at a suggested list price of €9,990. It is supported by an industry leading five-year warranty program (1 year + 4 additional years with registration). In addition, between April and June 30th 2010 when the end user buys the new HPX371 and after they register their camcorder at the promotional site http://www.panasonic-broadcast.com/en/HPX371.php they will receive a new AJ-PCD2 single slot drive and a AJ-P2E032XG 32Gb card for free. Detailed Terms and Conditions of the promotion are also available at the registration site.