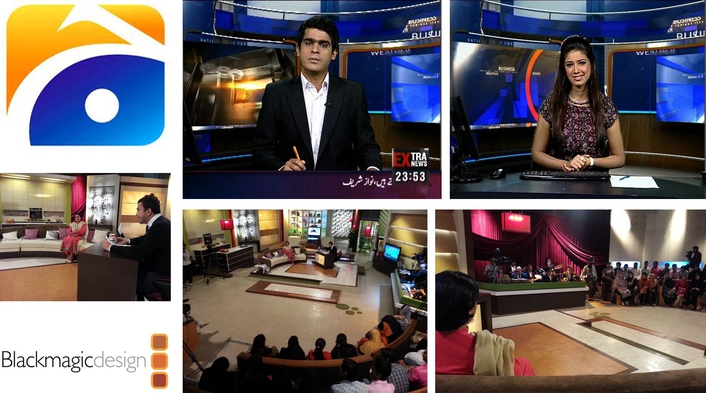 .
Geo Television Network (Geo TV) is Pakistan’s largest television broadcaster and has been bringing viewers the latest in news, entertainment, sports and youth programming for more than ten years. With five news stations in major cities throughout Pakistan and recent upgrades to their workflow, Geo TV is leading the country’s HD revolution.

At the forefront of this upgrade is Afaq Ahmed, Chief Technology Officer at Geo News, a division of Geo TV. He’s been responsible for overhauling the broadcast infrastructure at Geo TV assisted by Blackmagic reseller Ion Audio Visual. At the center of the newly adopted HD workflow sits a variety of Blackmagic Design products, including several ATEM 2 M/E Production Switchers as well as an ATEM 1 M/E and ATEM 2 M/E Broadcast Panel.

The Switch to Digital
“When we started in 2002, GEO were still operating a partially tape based workflow,” said Afaq Ahmed. “Now it wasn’t until 2008 that we decided to make the switch to an entirely file based architecture. Anyone who’s done this already will know that this isn’t an easy switch. Since making the transition we have slowly been introducing things like tapeless cameras, optical fiber and HD enabled hardware.

“Now, while we have the ability to produce content in HD, our final output is broadcast in SD. That is down to the fact that most of the national broadcasting infrastructure in Pakistan is still geared towards SD. What we do is down convert the HD content to SD for distribution in Pakistan, the US, UK and UAE, but we will see that change over time. Having the HD enabled hardware means we are better prepared when that change does happen and ensures we are future proof,” said Ahmed.

Having the Right Tools for the Future
According to Ahmed, the master control room at Geo News in Lahore is the most critical of all of their studios, as this is where the output from multiple stations is collected before graphics are overlaid and the digital feed is distributed via satellite. This all important process incorporates an ATEM 1 M/E Broadcast Panel with ATEM 2 M/E Production Switcher.

“We are using ATEM to input video, control cameras and graphics, which is everything that the viewer will see during the broadcast of our daily morning news show, ‘Geo Shaan Say’ and evening talk show ‘Khabarnaak’.

The HD studio at Geo News uses three digital cameras, a CG and playout server connected to the ATEM 2 M/E Production Switcher over SDI for live recording to a tape deck.

“The studio setup for all live and recorded programming is essentially the same. The only difference is the down conversion stage, which is done via DeckLink cards in a recorded scenario or the ATEM Production Switcher in a live scenario. Adding the ATEM Broadcast Panels to our workflow made sense because it allowed us to have full control of the switcher, while adding lots of functionality to the switching process. I think having a control surface panel is essential for a fast paced newsroom environment, when quickly accessing an effect, mix or wipe really counts.

“Furthermore, the ergonomics of the panel are very intuitive and I found it easy to get to grips with it soon after the installation. It’s a nice design and all of the controls are well positioned for quick access,” said Ahmed.

A Fiber Foundation
“Blackmagic Design’s products are some of the most vital pieces of equipment that we use. Not only are we using the production switchers and DeckLink cards, but we’ve also built a fiber distribution system throughout the studio complex using around 100 Blackmagic Design OpenGear and Mini Converters.”

He adds: “There are a lot of changes happening at Geo TV, including new studios, new stations and new distribution networks to mention just a few. So when we decided to build the foundation for our upgraded studios, we went with optical fiber as the backbone because fiber is easy to manage and can send signals over long distances without losing any quality.”

Bridging Quality and Price
When deciding on what products to implement into Geo TV’s studios, combining quality and price is of upmost importance to Ahmed.

He explains: “We first saw this combination of high quality and affordability exemplified in Blackmagic Design’s ATEM Production Switcher range. Not only did we get a high end broadcast quality switcher with built in multi view, lots of effects and transitions and all the connections that we needed, but it was also a fraction of the price compared with other switchers.”