PacTV Upgrades MCR & Studios and Gears up for Downlinks-On-Demand 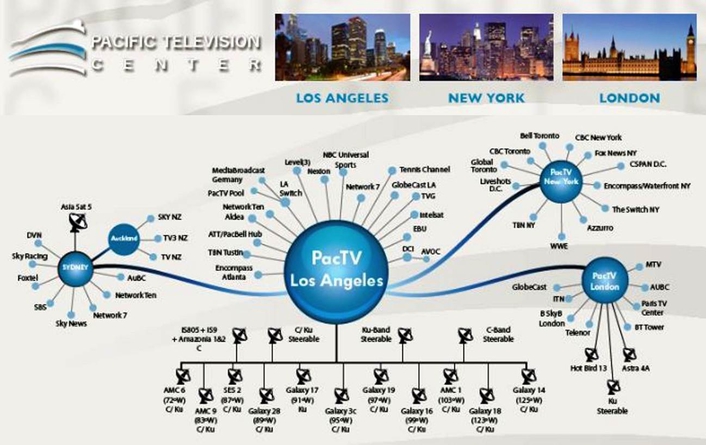 Improvements at New York and London Branches Support Global Renovation Plan
As a result of installing five new workstations—the old MCR staffed just two—and a total of 12 screens, the redesign has enabled PacTV to increase the number of feeds it monitors from 64 to 162, with the company projecting it will monitor 240 feeds once the monitoring wall is fully populated later this year.

“Over the last few years, our client roster has grown significantly worldwide, and along with it, our need for increased staff and monitoring resources,” says Richard Neri, president, Pacific Television Center. “Moreover, this redesign has created a very functional space in which our team can collaborate more effectively on multiple projects.”

As part of the entire build-out of the facility, which is designed by Robert Ward & Associates, PacTV recruited Veneklasen Associates to design the acoustics in two of the three studios in Los Angeles. The studios have been fully upgraded to HD, soundproofed with new acoustical treatments and equipped with new Sony HXC100K HD cameras. Moving forward, architect Robert Ward has been commissioned to establish and maintain consistent design across all PacTV facilities. 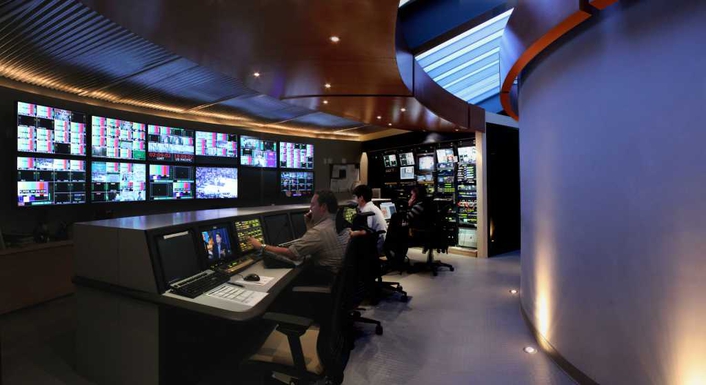 PacTV is also in the process of upgrading studios in London and New York.  In London, the company is currently building a second HD-capable studio, which will be ready in time to support its broadcast clients, for coverage of the Queen’s Diamond Jubilee celebration in June and the major global sporting event that kicks off in July.  The new studio will be equipped with a Sony HXC100K HD camera.  To support these upgrades, the studio control room in London is also being enhanced, under the guidance of AbsoluteCad. 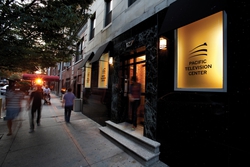 PacTV New York is also reconfiguring its MCR, in order to support a more collaborative work environment. Upgrading from one to three workstations and installing a new monitoring console has allowed for more efficiency and streamlining of daily duties. The New York facility has also graduated to a fully HD-capable, 96 x 96 router, along with a second studio, makeup room and a new green room.  Mancini Duffy Architecture is overseeing the New York project, while SIA Acoustics is handling the acoustical treatments in the new studio.

“Communication is at the heart of our business and PacTV is fully committed to providing our clients with the best possible service in all of our facilities,” adds Neri. “In order to achieve this, all three of our MCRs communicate using a Trilogy intercom system.  In addition, we have four more intercoms deployed at clients and vendors in Auckland, New Zealand, and Sydney, Australia. It is our goal to create a seamless broadcasting community around the globe.”

New Service Will Enable Clients to Access US Satellites with Customer Controlled Ports
The currently ongoing Downlinks-on-Demand testing involves PacTV’s Evertz XRF6 router, which is currently expanding to 64 inputs and 32 outputs, with room for a full 64 outputs. Ultimately, PacTV’s Downlinks-on-Demand will provide clients around the world the ability to remotely control and downlink from any fixed dish at PacTV Los Angeles.

“We are very excited to start beta-testing this new service,” says Jakob Nielsen, PacTV’s Projects Coordinator. “It is really quite revolutionary to give our clients, both here and abroad, the ability to connect to and downlink simply by using a GUI on a dedicated website with a fixed monthly port cost. This new service will integrate client router systems with PacTV’s so they can easily select which satellite they want and automatically log the switches into their equipment.”

A large part of this beta testing also involves CompuSat Satellite Control and Automation Systems by Image Communications. PacTV has engaged the company to customize its software so that it will allow PacTV’s control system to work with its Evertz Demodulators.

“As additional needs arise for specific features, we can work with CompuSat to develop that,” says Nielsen. “It will give us the ability to tie PacTV’s controls into any router, tape machine or other control system in the world. By using the SCP public domain interface, any control system worldwide will be able to interface with our CompuSat system. CompuSat is a widely used software company and we look forward to working with them through this product development.”

In addition to Eurovision Americas, Network 7 Sydney’s Los Angeles bureau, is planning to utilize the new service beginning early this summer. When deployed, Network 7 Sydney will have two dedicated RF ports; one for AMC1 and the other for itinerant work from PacTV’s extensive inventory of fixed dishes.

ABOUT PACIFIC TELEVISION CENTER
For more than 30 years, Los Angeles-based Pacific Television Center has been a leading transmission and live production provider to the global broadcast industry offering its clients around-the-clock support and services in fiber connectivity, downlinks, satellite coordination, receive and records, multi-format tape play outs, live shots, satellite media tours and voiceovers. On a local level, its broadcast facility in Los Angeles connects to the ATT/PacBell Hollywood Hub and The Switch Los Angeles; in New York, it connects to Ascent Media Waterfront, The Switch New York and Azzurro; and in London, its facility has multiple circuits to and from BT Tower.  Additional services include the PacTV Pools in Los Angeles, remote location production via Western Pacific Mobile Microwave in Los Angeles, and a fiber network to several countries including the UK, Australia, New Zealand, Canada and France. The company’s solid reputation has led to successful relationships with major networks including ABC, CBS, NBC, FOX, ESPN, CNN, BSkyB and BBC in the UK, Network TEN in Australia and Sky in New Zealand as well as top carriers including SingTel, SES World Skies, BT, Nexion, XO Communications, Aldea, Colt, Verizon, and Level 3/Vyvx.