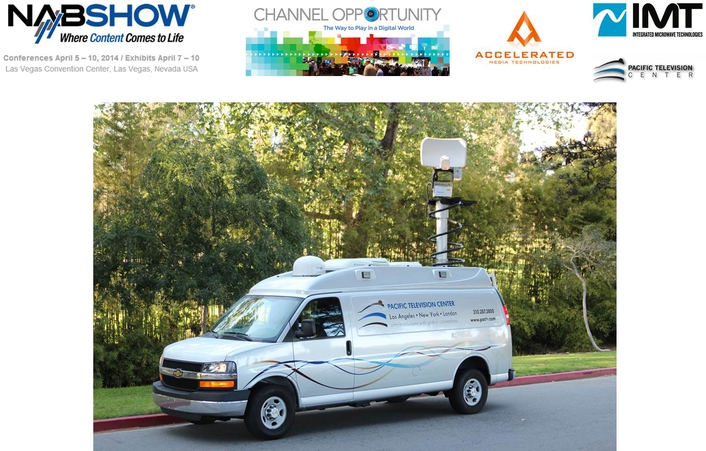 PacTV's new ENG truck combines the company’s existing and proven fiber network with IMT’s state-of-the-art microwave gear, providing a complete point-to-point solution for mobile broadcast productions. PacTV’s longtime studio experience allows the company to manage the entire end-to-end fiber and microwave workflow, while its ENG truck and microwave network in Los Angeles can cover nearly 10,000 square miles. The mobile facility is equipped with a wireless camera and IFB with return-vision capability, giving users the freedom to get the shot at a distance. It can stream MPEG-4 HD quality video and audio, and is armed with encoders capable of doing four separate services, for multiple clients, at once.

“We are excited to demonstrate our new ENG truck featuring IMT’s Newscaster to NAB attendees at this year’s show,” says Nick Castaneda, Vice President of Development, PacTV. “This truck is unique in that it is designed to interface directly with the Master Control Room (MCR) in our Los Angeles facility; it is like having an MCR and live-shot facility on wheels. Our microwave network, which includes the Mount Wilson and Century City receive sites, brings mobility and versatility to any live broadcast at a fraction of the cost of traditional satellite trucks.”

AMT, specialists in vehicle integration for a wide range of applications including broadcast and mobile communications, facilitated the integration of the gear into the new PacTV truck. In addition to the IMT equipment, the truck also comes fully loaded with an abundance of top-of-the-line communications and intercom products from RTS, extensive networking gear, including a hardware control panel and card from Trilogy, and a router and synchronizer/converter from AJA Video Systems, as well as a complete remote camera interface system from Studio Technologies.

“We are proud to host PacTV’s impressive ENG news van at our outdoor booth throughout this year’s NAB show,” says IMT Divisional Chief Executive Stephen Shpock. “The Nucomm Newscaster VT7.4 is a major step forward in van transmitter technology, as it offers more features than any other product in its class, and we are thrilled it has been integrated into this technologically advanced vehicle.”

IMT’s Nucomm Newscaster VT7.4 HD/SD ENG/SNG/OB Van Transmitter is a favorite among broadcasters, with more than 600 units currently in use across the globe. The most recent model (VT7.4) has been redesigned to support both HD/SD low latency MPEG-2 and MPEG-4, and Part-10/H.264 encoding with digital RF power of up to 10W. The VT7.4 features a two-box design and a wide array of inputs, and can be configured for both analog and digital operations. The COFDM modulator has full control over the modulation formats, bandwidth, data rate and guard interval. It features software-generated modulation formats that are stored in on-board circuit-board PROMs. Users can easily update the VT7.4 software as additional digital software formats become available, increasing the flexibility of the VT7.4 and avoiding obsolescence. Software-based modulation greatly reduces system complexity and component heat generation, thus providing even greater reliability.

About Pacific Television Center
For more than 30 years, Los Angeles-based Pacific Television Center has been a leading transmission and live production provider to the global broadcast industry, offering its clients around-the-clock support and services in fiber connectivity, satellite coordination, receive and records, multi-format tape playouts, live shots, satellite media tours and voiceovers. On a local level, its broadcast facility in Los Angeles connects to the ATT Hollywood Hub and The Switch Los Angeles; in New York, it connects to Encompass/Waterfront, The Switch New York and Azzurro; and in London, its facility has multiple circuits to and from The BT Tower.
Additional services include the PacTV Pool in Los Angeles, remote production via PacTV's ENG truck, and a fiber network to several countries including the UK, Australia, New Zealand, Singapore, Canada and France. The company’s solid reputation has led to successful relationships with major networks including ABC, CBS, NBC, FOX, ESPN, CNN, BSkyB and BBC in the UK, Network TEN in Australia and Sky in New Zealand as well as top carriers including AboveNet/Zayo, SingTel, Intelsat, SES World Skies, British Telecom, Colt, Nexion and Level 3.