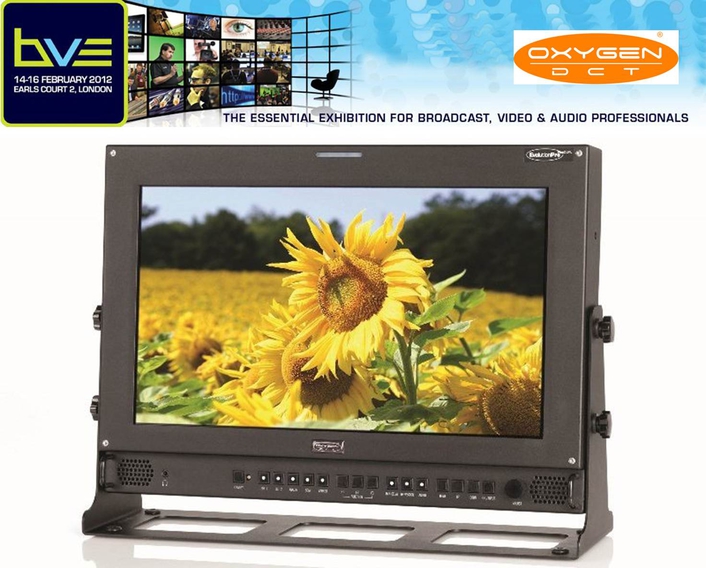 Oxygen DCT will exhibit on stand i60 at BVE
Renowned as the UK market leader in LCD monitoring products, Oxygen DCT will showcase a host of new monitors for broadcast and production at BVE 2012, including a new generation of 3D monitoring. The new products and technologies will touch a wide variety of television and digital film from DSLR camera operators to 3D shooting and production galleries for studios and outside broadcast.

Oxygen DCT has become the UK leader in broadcast monitors through its most extensive product range, expertise, objective advice and solutions. These new innovations compliment and expand on the existing product range of own label Evolution Pro Series monitors and those from Penta, Astrodesign and Osee for whom Oxygen DCT is an exclusive distributor. There will be a 5” DSLR monitor, a new 18.5” multipurpose monitor, 17” production monitor, 24” and 47” 10 bit, reference monitors as well as an impressive monitor wall with 3D monitoring.

Whilst the OxyStack monitor wall replicates a typical production gallery capable of monitoring up to 32 signals it raises the standards with grade 1, Penta 24”, 10 bit  monitors giving precise colourimetry to REC709 standards, future proofing it for 1080p productions. Furthermore, the PVW preview and PGM programme reference monitors are able to displaying 3D images adding flexibility for use at live 3D events and productions. This OxyStack is available as a turnkey system and can be customised to individual requirements with installation available worldwide, in studios and outside broadcast vehicles.

“As part of our 'customer choice' package, we have introduced new 3D monitoring, which allows production crews to operate in 3D mode at a touch of a button,” says Steve Hathaway, Oxygen DCT’s Managing Director. “This is a high advantageous situation not only because of the flexibility but because it also allows the integrity of the gallery to remain in a familiar layout and design, thus negating the need for a special design for viewing 3D signals.”

By contrast Oxygen DCT is showing the MultiStack™, a low cost monitor wall system for temporary and permanent fixed installations. MultiStack™ has been designed as a more budget conscious monitor wall with individual source monitors arranged in rows according to production requirements. Whilst less than 60% lower cost than a 32 signal source Grade 1 monitor stack it has some benefits too as far as resilience is concerned and viewing angle as the 9.7” monitors use IPS LCD technology to give a wider viewing angle, approaching a full 180 degrees.

Hathaway adds: “Monitoring is often a challenge to many broadcast engineers as they try to balance monitor wall design with ergonomics and available budget. Oxygen DCT’s vast range of monitors and multiviewer systems, coupled with our extensive experience in monitor gallery design, enables us to provide our customers with the practical advice they need to achieve the very best results.”

Oxygen DCT’s new 18.5” multipurpose LCD monitors has been introduced as a replacement for popular 17” LCD monitors, which are fast approaching end of production.  This new monitor will rack mount and has the benefit of a larger picture area. It inherits all the features of its predecessor such as simultaneous waveform monitor and vector display, audio metering, safe area markers, multiple inputs up to 1080i and audio outputs. The OBSM182 is shipping now and priced at well under £2000. Complimenting this is the 3G OBXM171, a dual display 3G, 1080p capable monitor with full signal monitoring and not just picture display. In addition to the waveform and vector display and audio metering, there’s signal status monitoring for CRC errors, Sync, signal format and more. It also incorporates Oxygen DCTs wrap around FlightDeck™ status display, simultaneously showing picture, audio, meters and signal status data.

For production people, the IBC award winning Evolution P3 7” and 17” monitors will be on display, together with a new 5” monitor range for DSLR cameras such as the popular Canon 5D and 7D.

In contrast, the new 47” Grade One reference monitor – the PDP-47-3G – offers customers such astonishingly life-like picture quality that many users have described it as ‘better than reality and like 3D’. Already in use as a grading monitor with BBC TV and another major post houses, the PDP-47-3G has at its heart 10 bit LCD technology that is driven from 16 bit over-sampled inputs and signal processing. The monitor also conforms to REC709 colourimetry, making its equally suitable as a reference monitor for grading as well as on set replay.

“The colour accuracy of this monitor is simply tremendous,” Hathaway says. “It also addresses the film sector as there are pre-set LUST for Cinespace and users can make their own colour look up tables according to production requirements.”