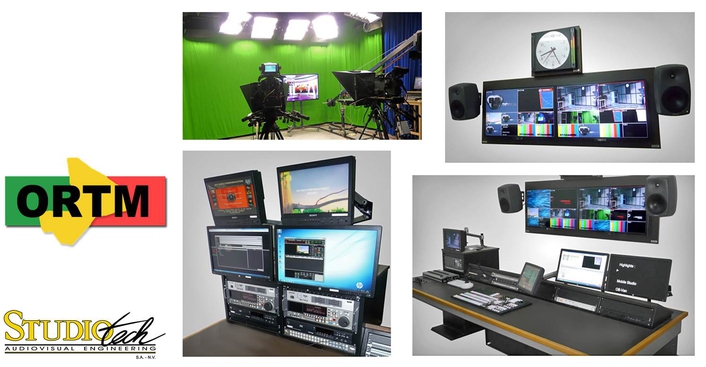 .
Studiotech Belgium, a key player in the global broadcast systems industry, has completed and commissioned a new installation for ORTM’s second channel TM2 in the West African state of Mali. Studiotech was awarded the tender for the construction of a new building in Bamako and the supply and installation of production equipment.

The Office of Radio and Television of Mali (Office de radiodiffusion et de télévision du Mali, ORTM) is the national broadcaster of Mali.

Studiotech Belgium’s challenge was to complete the project in the record time of six months, a challenge that has been fully achieved and has met with full customer satisfaction.The design and development of the project was entirely planned and managed by Studiotech Belgium, who provided the latest broadcast equipment and systems for this ambitious television project.

Mr Mohaed Soumana Maiga, Coordination and Project Monitoring/Partnerships, RAPAF (Francophone African Network of public broadcasting), ORTM said “We were impressed by the design, implementation and the choice of equipment. The Studiotech team were informative, helpful and responsive, and the project came in on time and on budget.”

Dominique Verhoest, Technical Director at Studiotech commented “One of the project’s many technical requirements and challenges was the integration of a production control room and final control room in one area to be used for both live TV broadcasting as well as the distribution loop.”

The latest and most powerful computer and audiovisual resources were implemented by Studiotech Belgium to ensure production and distribution 24/7 to HD standard.

Studiotech Belgium is a well known integrator in Africa and represents the leading manufacturers in the field, including Evertz Microsystems.

Studiotech Group’s main business is the distribution, sales, installation and after-sales servicing of broadcast and professional audiovisual equipment. The company also designs and installs turnkey projects such as recording and mixing studios, editing suites and mobile OB units. Studiotech’s good name is based on first class service and customer satisfaction. The staff are held in high regard for their product knowledge, quality standards, attention to detail and customer care.

In a relatively short time, the Studiotech Group have become recognised as leading players in the field of broadcast and audiovisual engineering across Europe. Studiotech began in Brussels, serving Belgium and Luxembourg, in 1990, then offices followed in Budapest, Hungary, Warsaw, Poland, Algeria, Rabat, Morocco, and more recently Paris, France and Sydney, Australia. The founders and key members of staff have extensive professional experience which they continue to develop in step with leading-edge technology.