Optocore Takes The Grammys For The Fifth Straight Year 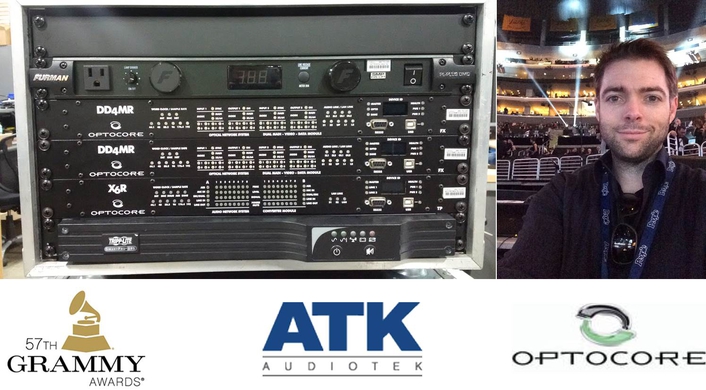 The Grammy Awards, held annually at the Staples Center in Los Angeles, CA, recognises the recording industry’s best artists
As was the case in previous years, ATK Audiotek again relied heavily on a predominantly fibre optic-based network run on Optocore, for the recent 57th edition. For the last five Grammy Awards ATK Audiotek has used Optocore to transport the award winning music that is performed live at the show, this year including AC/DC, Beyonće, Madonna, Katy Perry, Tony Bennett and Lady Gaga to name a few.

The complex nature of the Grammys, in conjunction with the ‘mission critical’ delivery aspect of a live event, defines the need for flexibility and absolute fault tolerance and recovery that only Optocore’s unique 3-way redundant architecture provides.

Jeff Peterson, the incumbent system PA designer for the award show, has relied on Optocore to deliver quality audio under these exacting conditions since 2011. This year’s network drive system included eight Optocore devices in four locations, distributing the primary AES signal and an analogue backup feed to the processors and amps as well as transmitting all the processors’ control data.

A mandate of ATK is that the system can never ‘lose’ the programme, so every aspect of transport has to be redundant. Therefore redundant MADI streams were taken from FOH via an Optocore DD4MR-FX and sent out to the amps and XTA processor racks which were fed by redundant AES connections from Optocore DD32R-FXs. For analogue redundant tie lines X6R-FX and TP units fed mic and line signals from the stage to both FOH and the amp racks. Any input on an Optocore network can be routed to any output at any node with virtually unlimited channel count.

From FOH Peterson controlled the system processors in the amp racks via Optocore’s built in 100Mbit Ethernet transport ability without the cost and time of having to run any additional cables or switches, thus ensuring him redundant control as well.

An additional benefit of Optocore to Peterson is its ability to plug directly into the DiGiCo’s optical network ports and have the devices show up right on the desk. “Everything is controllable, from routing through to the preamp gain,” he said. “Our DiGiCo inventory is always in use and always moving and having the flexibility to plug someone else’s gear into it without having to bring extra cables or converters or adding latency is a big bonus for us because it removes points of failure.”

When asked, Jeff Peterson said, “Optocore made set-up effortless — the system was up and running in no time and dead quiet due to the fibre network’s opto-isolation.” He concludes, “I was able to seamlessly route signals as needed. With the Macro feature of Optocore control, I could instantly switch between main and backup consoles, and re-route around any failed speaker processor. Fortunately, we never had to use the feature, but I’m glad it was there.”