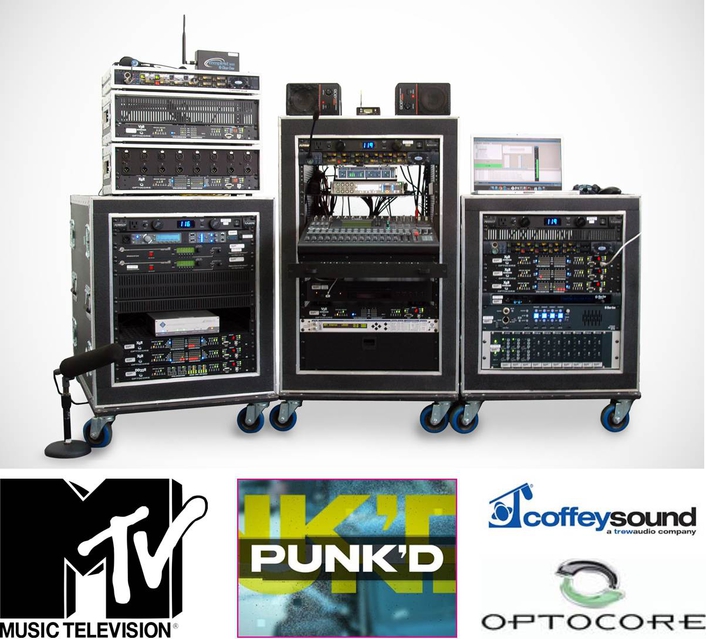 Coffey Sound’s New Intercom System takes Film/TV Location Work to Next Level
When MTV’s Punk’d hit the airwaves on March 29 (10:00 p.m. ET/PT), few may have realised the massive effort required to capture the excitement of the pop culture phenomenon series, which punks celebrities with hidden cameras.

To help streamline those operations, Gary Vahling of Coffey Sound, a Trew Audio company, long recognised as one of Los Angeles’ leading sources for audio equipment in the entertainment industry, relied heavily on Optocore’s latest intercom devices. To deliver the action amongst the production crew, Optocore V3R-FX-Intercom and X6R-FX-Intercom network devices were paired with Clear-Com’s V12-PDX4 display panels connected to a PiCo frame, which are part of the Eclipse Digital Matrix product line.

Optocore’s V3R-FX and X6R-FX interfaces provide four and eight ports via single module or multimode fibre respectively or CAT5 ‘SANE’ (Synchronous Audio Network plus Ethernet) ring connectivity that allows intercom to travel over the entire Optocore audio network. Along with fibre audio muxing solutions to and from Clear-Com’s remote panels, these units can also send and receive 4-wire audio around the connected ring. Better still, redundant LAN for IP panels and/or PC management can be made from anywhere on the network.

“I could see immediately that the plug and play facility would make for superfast setup, which reduces production costs,” noted Vahling. “And it went much further than that. The integration of the Optocore improved the quality of the entire audio package. The noise floor was reduced substantially, the dynamic range was increased, and the advantage of audio networking came into play.”

Optocore ticked all the boxes, at the same time demonstrating the vast amount of time saved using ‘one click’ reconfiguration changes for different scenes without rewiring. “The Clear-Com integration also included reduction of external cabling and increased sound quality in the communications circuits,” explains Vahling.

Director of Optocore North America, Bill Coons, stated: “This location sound solution provides a faster, quieter, smaller, lighter and less expensive option than they had previously. With this, fibre intercom for location production has now become a reality.”

In addition to the Optocore intercoms and Clear-Com display panels, Sennheiser MKH 8070 microphones with MZD-8000 Digital Modules were used with Neumann DMI-2 Digital Microphone Interface to fully take advantage of digital capabilities of the fibre optic audio network. A Yamaha O1V96 with Optocore YG2 card mixer was used as the interface’s centrepiece alongside a Sound Devices 788T for the show’s multi-track recording. Punk’d production sound mixer, Sean O’Malley, is pleased with the fast set up times and the overall sound quality.

“The gear has performed flawlessly on set, helping to herald in some amazing audio tracks and provide seamless communication within the crew. Communication is such an important factor during our reveals — if it fails, the entire episode could collapse,” adds O’Malley.

Since Coffey Sound provides packaged support systems for both large and small productions, the pairing of Vahling’s long term relationship with Punk’d made producer’s decision to work with Coffey Sound that much easier.

The Optocore solution had exceeded all expectations, says Vahling. “It has really brought this package to the next level with its ability to operate as a plug and play system. It has also significantly improved the workflow of the audio crew — and the sound quality project being sent to post is better than ever.”

About Trew Audio
Trew Audio is devoted to the art of location sound recording for film and television. Founded by sound mixer Glen Trew, Trew Audio was designed to fill the widening gap between sound professionals and support services that has grown as film and video production has become less confined to Hollywood and New York. With four locations in Los Angeles, Toronto, Vancouver and Nashville, Trew Audio is a leader in the sales, rental, and service of audio equipment for professional film and video production in markets worldwide.