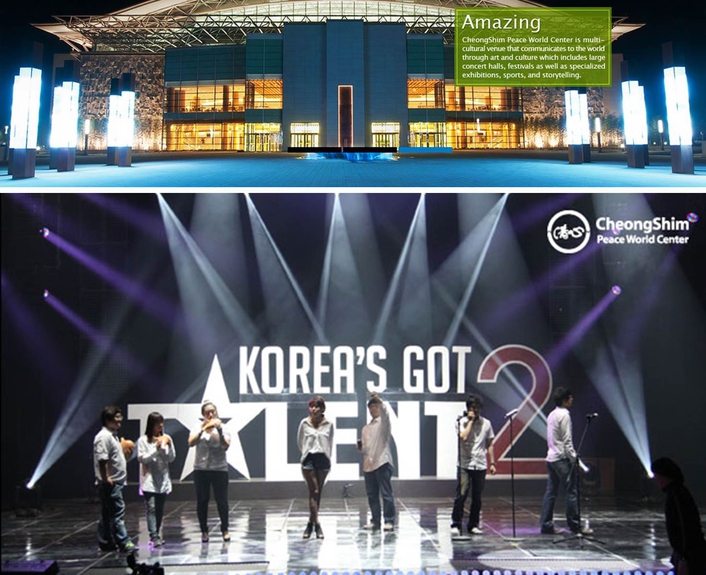 Fiber Transport System Boasts Superior Audio, Reliability And Cost-Effectiveness as Key Benefits
When the CheongShim Peace World Center first opened in late 2011, the AV technology team knew that the vast size of the arena (it seats up to 25,000 people) would dictate the type of audio and data transport system that would support it. Traditional analog lines were just not going to cut it. Instead, the team turned to Optocore, the leading provider of scalable, high-bandwidth, low-latency fiber-optic networks for the transmission of audio, video and data in a variety of markets, for its fiber transport technology.

Located just over 21 miles outside of Seoul in the Gapyeong District in South Korea’s Kyunggi province, CheongShim Peace World Center is owned by Unification Church (also known as Moonism) and is the largest multipurpose hall in the area, to date. The approximately 1,367-square-foot (127 meter) steel-frame structure boasts a 29 ½ foot (9 meter) high arena that is generally used for various activities by the Unification Church’s general assembly, as well as for corporate events, concerts, plays or CF (commercial) shooting. Paired with Yamaha gear, the recently installed Optocore fiber system is just what was needed to properly transmit audio digitally from the microphones to the Front of House (FOH) and the PA system to its large constituency. Without it, the size of the venue would be just too big to transmit microphone signals over analog lines.

“We chose the Optocore system for its reliable optical transmission system, in order to ensure the audio would be heard throughout our large arena,” says Kim Hanchoon, audio/video technical director, CheongShim Peace World Center. “Traditional cabling was just not going to be reliable enough and while Optocore is still a rather new technology to many here in South Korea, we were happy to expose the team to Optocore’s fiber optic transmission method and all of the benefits that can be reaped from it.”

The equipment has been installed to support Front of House (FOH) as well as the sound control room. The Optocore DD32E system consists of three X6P-16IN units in the stage rack, each with 48 channels of analog mic inputs to digital and one X6-16OUT with 16 channel digital to analog converter. In addition, the DD32E provides AES/EBU feeds to the system’s loudspeaker DSP controllers at the main mix position, with a Yamaha PM5D mixing console loaded with one Optocore YG2 fiber optic card and two additional Optocore YS2 Slave cards that allow for up to 48 inputs and outputs to/from the Optocore network to the mixing console, as well as control of the X6 Optocore microphone preamps.

In the sound control room there is a Yamaha DM2000VCM mixing console loaded with an Optocore YG2 fiber optic card and two Optocore YS2 Slave cards that allow for up to 48 inputs and outputs to/from the Optocore network to the mixing console as well as control of the X6 Optocore microphone preamps. Rounding out the system, the technical team uses speakers and a speaker control unit from Meyer Sound.

Of the many benefits that the Optocore system has provided to the church, three stand outs for Hanchoon include sound quality, console connectivity and long-distance transmission.

“Having the Optocore system in place enables us to transmit signals by a fiber optic cable without noise or any audio loss,” he explains. “When our audio is passing through small outputs such as at the microphone level, there is no noise to distract our constituents; they are hearing the sermon, loud and clear, which is something that’s very important to us. In addition, it’s easy to control the Optocore system with the touch of a button on the console, while it also can handle the user to patch in all 48 channels, easily configuring the control layers.”

Finally, Hanchoon says he is pleased with the long-distance capabilities that fiber optic transmission has afforded to the church.

“It’s often the case when using a multi-cable setup for a long distance signal, that there might be a loss of signal transmission caused by the circuit size that is over 200 meters, such as in our case,” he says. “By utilizing Optocore and fiber optics instead, we can overcome the distance barriers, ensuring smooth, reliable transport every time.”

“We are so pleased to provide such a complete solution to the A/V team at CheongShim World Peace Center,” says Tine Helme, director, Optocore. “The fact that our system can be used in three ways—as an electrical transmission system by multi-cable (analog), signal transmission of console and stage box (using PM5D and DSP50) by UTP cable, as well as optic transmission—is further proof of the unprecedented benefits that fiber transport can bring to even the most challenging of situations, such as CheongShim’s large venue.”

About Optocore
Based in Munich, Germany, Optocore is the world market leading provider of scalable, high-bandwidth, low–latency fiber-optic networks for the transmission of audio, video and data. For 20 years, Optocore has been continuously innovating and setting new standards with regards to digital network technology. Optocore builds and develops synchronous optical fiber and CAT5 based network solutions for broadcast professionals, fixed installations and live event applications. Utilizing leading-edge technology and high-quality components Optocore guarantees durability and therefore long-term market and customer satisfaction. Due to the open system architecture, Optocore’s platform offers other manufacturers the option to transfer conventional standard audio, video and data formats used in the pro audio industry, via a fiber and CAT5 network. Technical expertise, QoS and an extensive support structure are guaranteed to all customers, together with the highest level of quality controls.