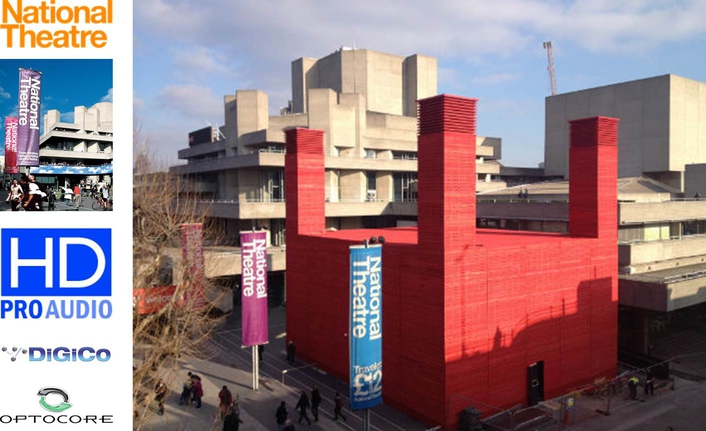 These have been deployed as MADI interfaces for the venue’s DiGiCo SD7T and SD10T consoles, following the introduction of the full DiGiCo integration of Optocore devices.

Commissioned by project engineer Tim Middleton, and senior sound technician Alex Caplen, the Optocore devices are distributed in pairs between the three theatres that make up the complex — the newly-named Dorfman (formerly Cottesloe), Lyttelton and Olivier Theatres. These are linked to the DiGiCo front of house consoles (SD7Ts in the Olivier and Lyttelton, SD10T in the Dorfman) with a roaming SD10T, which can be used as a rehearsal console or designer’s remote.

After providing a redundant optical loop (via multimode fibre) at the 450-capacity Dorfman Theatre for its inauguration galas, the DD4MR-FX’s first high profile outing has been on the new David Byrne and Fatboy Slim musical Here Lies Love (with sound design by ML Dogg and Cody Spencer), which has transferred from the Public Theater, New York.

“As the channel counts continue to expand, so does our need to get MADI on and off the Optocore network,” he said. “I had been looking at Optocore for a while as a way of getting MADI onto the network and knew it had its own protocol. However, it started to get interesting once the devices were able to talk to DiGiCo, and Optocore’s Maciek Janiszewski had demoed it.

HD Pro Audio had also provided a DD4MR-FX for evaluation which passed the durability test. “At the galas we gave it a thorough outing,” Caplen confirms.

The National Theatre derives its sound Playback from a pair of new Mac Pro computers which provide 64 channels each of audio playback in a tracking main / back up configuration. Alongside this a pair of Mac Minis that act as convolution reverb and MADI recorder machines – all appearing on the Optocore network.

“Everything we do must have redundancy, and 64 channels from each of the four computers appear on the Optocore network,” he continued. “With a simple macro push we can seamlessly re-patch our entire playback and effects system to backup machines.”

Although the National had switched to MADI some time ago, they had been limited to the local I/O on the console. “By the time you have added your two computers you have used your two local MADI streams on an SD10T,” reasons Alex Caplen. 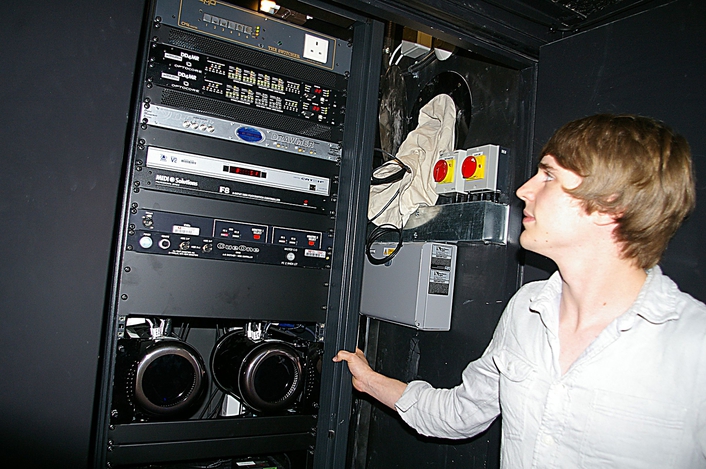 Alex Caplen with the Optocore rack in the Dorfman Theatre

The output ports of the DD4MR-FX are used to provide MADI feeds from the system to feed Direct Out Technologies’ Andiamo MADI/AES converters. MADI is also sent to a Yamaha DME64N mixing engine. These in turn feed AES to the amplifiers, keeping the entire system in the digital domain right to the amp. For the production of Here Lies Love 121 speakers are utilised to create a loud, immersive presentation, where the space takes on the role of a nightclub.

With 128 I/O on each unit and every amplifier appearing on the network it’s an elegant way of bolstering an already existing infrastructure. On musicals every channel will be recorded and the desk placed in ‘Listen’ mode enabling the show to be played back in its entirety the next day.

Summing up, Alex Caplen says, “This optical network is giving designers as much flexibility as possible — and allows us to not limit their creativity by the technology available to them. At the same time, I can access anything anywhere via the Optocore network, making multiple console networks much easier’.

“Optocore is a very flexible system; with dual power supply, it’s clear someone has really thought about the design.”