A huge dimmer installation was needed for the massive amount of conventional lights
The SWR ("Southwest Broadcasting") was established in 1998 through the merger of Süddeutscher Rundfunk (SDR, Southern German Broadcasting and Südwestfunk (SWF, Southwestcast) and has main offices in three cities: Stuttgart, Baden-Baden and Mainz. It is among the top three broadcasting organizations in Germany.

Now the SWR has finished its new "Funkhaus", a high tech building that was started in 2008 which is a huge step forward for the broadcasting organization in the direction of multimedia formats, as well as one of the best equipped broadcasting centres worldwide.

Studio Hamburg MCI GmbH and Despar Systeme AG are the companies mainly responsible for the installed lighting technology in the new Studios A, B, C and D.  A whole MA System solution was specified by the SWR, based on their very good experiences with grandMA control over the past five years.

Claus Werner, head of lighting at the SWR, commented: “Based on our good experiences with the grandMA in the past years, we made the decision to stay with the brand and use the latest grandMA2 technology. The consoles have extraordinary references and have proven themselves extremely reliable. Furthermore the MA dimmers make sense because of their bidirectional communication with the grandMA2 consoles. With the MA VPU we have completed our MA network, and now will benefit from a uniform network that communicates via the MA-Net2.”

Content distribution to the huge LED surface areas in studios A, B and D is demanding. The studios run 197 DMX-universes (A), 130 (B) and 54 (D) respectively – although the displayed content is not high-res. The LED surfaces are primarily used for displaying colour gradients, graphics and low-res content.

High-res content is mostly realised by the use of green screen technology. The Schnick-Schnack-Systems video strips have a pixel pitch of 10cm and are controlled by DMX512 via Art-Net. The contents for each studio are sent from the MA VPU plus that is controlled by a grandMA2 light. For easy and fast displaying of the content, the pixel mapper function of the MA VPU plus is used, which makes it possible to assign the content to the big LED surfaces –  for example the ‘horizon’ in Studio A, which is a surface area of 350 square metres. The overall LED surface of all studios is 720 square metres.

As all the grandMA2s are running on the MA-Net2 there is a flexible choice as to which console can control which studio. The SWR owns three direction rooms that are each equipped with a grandMA2 light. It is possible to control each studio from each of these three direction rooms. To avoid an operating error, e.g. two direction rooms trying to control one studio in parallel, each studio has its own address range and a monitor that displays which studio is available. So to access a studio, the grandMA2 has to be configured for this address range and the clearance has to be approved.

Studios A and B additionally use a grandMA2 light in the actual studio for the setting mode, while Studios C and D rely for this purpose on the grandMA2 onPC software installed on a laptop.

In addition, the studios have MA 2Port Nodes installed at different locations which are used for flexible input / output of DMX data on the MA-Net2, and are fully integrated into the MA System. They can be configured quickly and easily via the grandMA2 consoles. 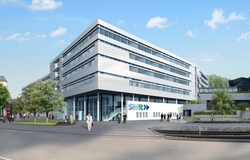