This One’s For You

Sound Image and Jimmy Buffett Celebrate 40 Years On the Road Together Using HARMAN’s Crown I-Tech HD Amps and JBL VTX Line Array
Jimmy Buffett has been extolling the laid-back pleasures of Margaritaville, having a Cheeseburger In Paradise and the fact that it’s Five O’Clock Somewhere since he recorded his first album in 1970. For 2014, San Diego’s Sound Image is celebrating 40 years as Buffett’s live sound provider with a new touring system based around HARMAN’s JBL VTX line arrays and Crown I-Tech HD Series amplifiers.

“When it comes to connecting with the audience, I think you can safely say that nobody’s better at it than Jimmy Buffett,” said Dave Shadoan, who partnered with Sound Image’s founder and partner, the late Ross Ritto, in 1971. “His fans hang onto every word at his live shows and they deserve nothing less than the best sound we can deliver.”

Buffett’s audience certainly isn’t going to have to strain to hear him sing. The live sound rig consists of 80 Crown I-Tech 12000HD amplifiers driving 52 JBL VTX V25 line array loudspeakers and 24 S28 cardioid-arrayable subwoofers. “We generally hang 14 V25 loudspeakers per side in the main array, with eight S28 subs next to them and 12 V25 loudspeakers in each of the left and right side hangs,” noted Sound Image front of house engineer Rich Davis. Depending on the venue, Davis will add more S28 subwoofers at the middle of the stage to fill out any void in the low frequencies, plus three S28 subs on each side if necessary. “We were in sheds at the start of the tour and will be outdoors through October.” 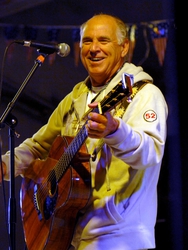 Davis noted that the biggest issue Buffett will have with a sound system is keeping the low end from building up on the “deck” that makes up the floor of the stage. “That’s one of the reasons I like to spread out the subwoofers and not use massive ground stacks,” he said.

Davis sets up the system using JBL’s HiQnet Performance Manager™ system control software. “The latest version of Performance Manager saves us a lot of time and simplifies the entire configuration and calibration process,” Davis pointed out. “It enables us to go deeply into the I-Tech HD’s many DSP functions, filters and crossovers and fine-tune the sound. It also gives me automatic control screens for each of the line array columns and if I need to edit, modify, add or delete a hang, it’s actually easy instead of being a time-consuming chore.”

Davis notes that he rarely needs any EQ on the high end and that the system is smooth from top to bottom. “We did a show in Raleigh and I walked up on the lawn, which was about 430 feet from the speaker stacks and there was solid low end all the way in the back of the lawn, which never happened before. This new system is more coherent and the low end really holds up.”

“The PA is super stable,” Davis added. “Jimmy is known for talking between songs and when he talks to the other band members it’s often sideways off the mic. I can ram that fader all the way up so that he can be heard and the system still doesn’t have any problems.”

“It’s been an honor, a privilege and a great time working with Jimmy all these years,” Shadoan concluded. “The only thing missing in this 40th year is my former partner and Jimmy’s former monitor engineer, Ross Ritto. Sound Image has always been about technological innovation and I know Ross would be thrilled to hear what we’re doing with Jimmy on his 2014 This One’s For You tour.”