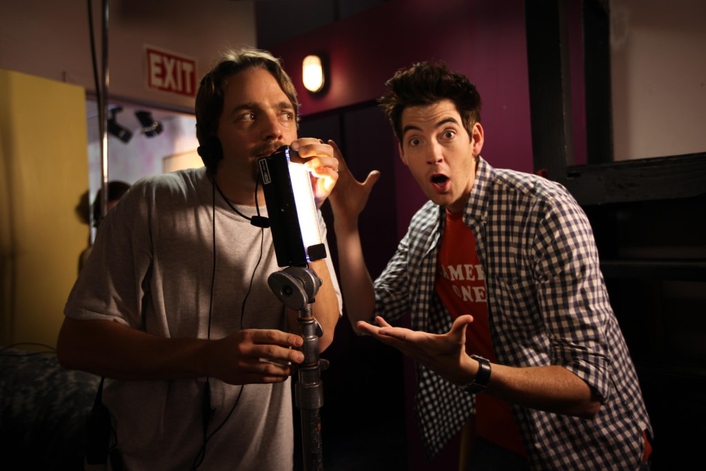 MiniPlus and 1x1 for indie film
For their indie feature “Odd Brodsky”, cinematographer Matthew Irving and director/producer Cindy Baer chose to use LED lighting from Litepanels, a Vitec Group brand.

Irving has been the cinematographer on two dozen feature films, including Fox Searchlight’s hit romantic comedy “Waitress” and Lionsgate’s teen comedy “Waiting”, but when he and Baer conceived the story for the ultra low-budget “Odd Brodsky”, they were concerned about the limited resources. “Despite some major sacrifices in the lighting department, I made sure my favorite Litepanels fixtures would be on hand,” says Irving, who has been an avid user of these LED lights since 2007. “We had to have a MiniPlus kit (Daylight Flood) and a 1x1 Bi-Color Flood fixture. As it turns out, they literally saved the day!”

“Odd Brodsky” is a quirky comedy about a lovable loser named Audrey Brodsky who quits her steady day job to pursue a lifelong dream of becoming an actress. There is just one problem: she’s not good at it. What she lacks in talent, she makes up for in heart. Baer and Irving created a film-style akin to Wes Anderson’s “Rushmore” or the Coen brothers’ “Raising Arizona” to capture the unusual moments of Audrey’s life.

“One day I found myself in an office location where we had two lead actors and multiple featured performers for a party scene, without our grip/electric truck or our usual lighting package,” Irving recalls. “Luckily, I had my Litepanels! Armed only with the 1x1 Bi-Color fixture and the two MiniPlus ‘bricks’, we carried on without missing a beat. We made our day and the footage looks fantastic!”

“The versatility of the Litepanels fixtures cannot be over-stated,” says Irving. “They have nuance and subtlety when I need them to sparkle in an actor’s eyes, and yet the very same fixtures can put out enough punch to light an entire scene. To me, they’ve become as essential as a C-stand.“

“Odd Brodsky” is now in post production and is expected to hit the film festival circuit by the end of 2012.