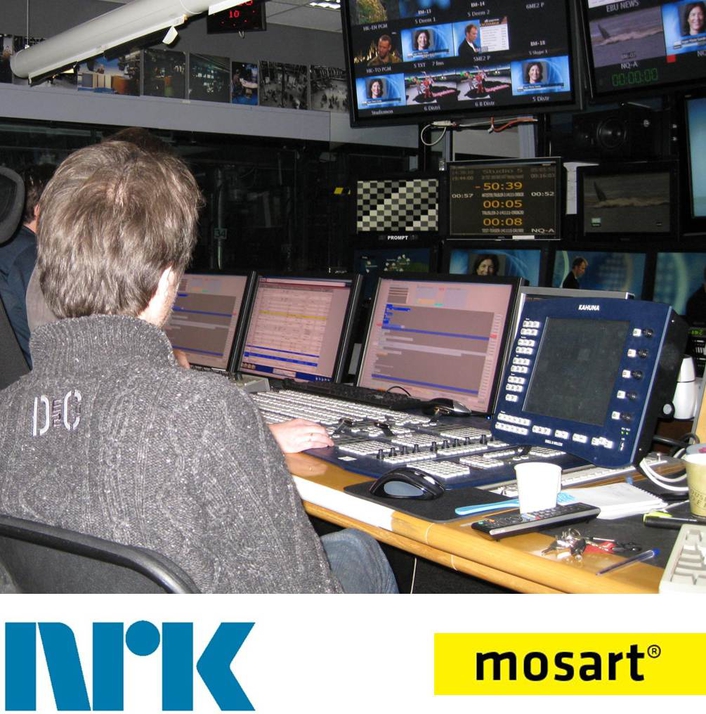 Prime-Time News and Sports Production with Mosart
Mosart Medialab today announced that NRK, Norway's largest media company, has installed a second license of the Mosart® newscast automation solution and ordered a third following the success of its existing Mosart systems in Studio 7.

While Studio 5 is used primarily for prime-time live news production, including the popular news program "Dagsrevyen", the new installation in Studio 6 will be used mainly for the production of NRK's large sports shows. With Mosart's support for multi-control room operation, NRK can share video server resources between the studios.

An important feature of NRK's multi-gallery Mosart installation is the Mosart Multi-Studio, a client interface that was custom-designed for NRK and is now part of the Mosart multi-gallery feature set. Mosart Multi-Studio enables NRK engineers to dynamically allocate prime and backup video sources for all three studios, with an at-a-glance view into which ports are available, and which are in use by a certain program. Engineers can choose any combination of video sources from the Mosart playout system, the studio's Omneon media server, or even the previous, legacy automation system to build redundancy into the workflow. In addition, integration with the network's Snell Kahuna SD-HD multiformat switcher gives NRK engineers the option of accessing Mosart Multi-Studio and the video sources using the switcher, for even greater flexibility in the live news production.

"NRK has a team of brilliant engineers and production staff and we are pleased that such a team appreciates our software and has added two Mosart-driven studios," said John Kjellevold, managing director at Mosart Medialab. "NRK is just the latest example of why Mosart is the fastest-growing newscast automation system in Europe, with installations in many of the best-known names in live news broadcasting."

About Mosart
Mosart Medialab is a subsidiary of TV 2 Norway and one of the cluster of technology spin-offs originating from TV 2, including Vizrt, StormGeo, Vimond, and Wolftech. Mosart Medialab develops and markets the Mosart® automation system for news, sports, weather, and live broadcasting applications. Conceived in 2002 at TV 2 by professional news directors, producers, and editors, Mosart meets the demands of live production by simplifying workflow and control, eliminating operational errors, and providing a highly flexible environment for ad hoc operation. High-level gallery control is combined with a sophisticated user interface, making it easy to override the schedule and improvise when breaking news demands instant response. Open-systems architecture ensures industry-leading compatibility with the widest range of third-party systems. Mosart is used for prime-time shows and 24/7 operations by major broadcasters. Mosart is Europe's market leader in studio automation. ARD, BBC, SKY, N24, TV2 Denmark, SVT, YLE, Global TV and NRK are a few of its customers.