No Limits with the NEXUS Logic Control 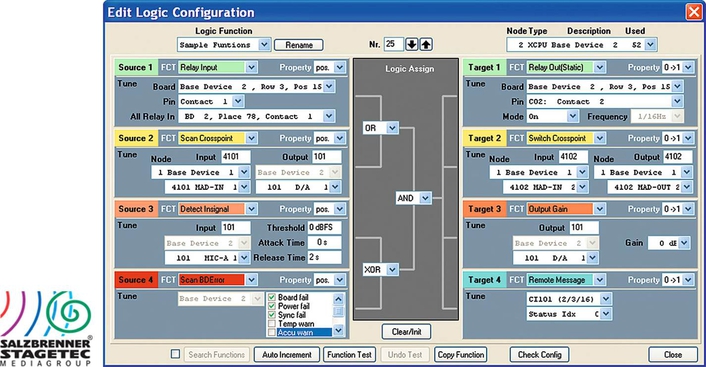 .
The STAGETEC NEXUS audio network is one of the first and longest established routing and transmission systems for audio signals. Since its introduction around 20 years ago it has been constantly refined, extended and made more powerful.

The new and extraordinarily extensive range of proven logic programming is no exception to this tradition of progress: In its latest upgraded incarnation, NEXUS Logic Control provides NEXUS users with the tools to realise far more elaborate controls in their systems than was previously possible.

With NEXUS Logic Control you can define links between states and actions of the NEXUS system. By utilising a variety of logic functions it is possible to query and link a broad range of states. This includes relay contacts and crosspoint states. If a STAGETEC mixing console is integrated in the NEXUS network then its control signals also become available in the logic programming – for example the information that a fader has been opened. It is also possible to trigger many mixing console functions, such as recall a snapshot, open an audio gate or control scene automation and much more.

In the simplest case Logic Control turns on the studio red light when a fader on the mixer is opened. In more sophisticated applications it enables rerouting of entire studios and production facilities, including all signals, at the push of a button. Benefits for NEXUS Logic Control users include fewer external peripherals, lower additional costs and reduced complexity of the overall installation.

International Jazz Festiv... in Lugano mixed by AURUS
NEXUS XRT
The Voice of Switzerland with STAGETEC Round Two