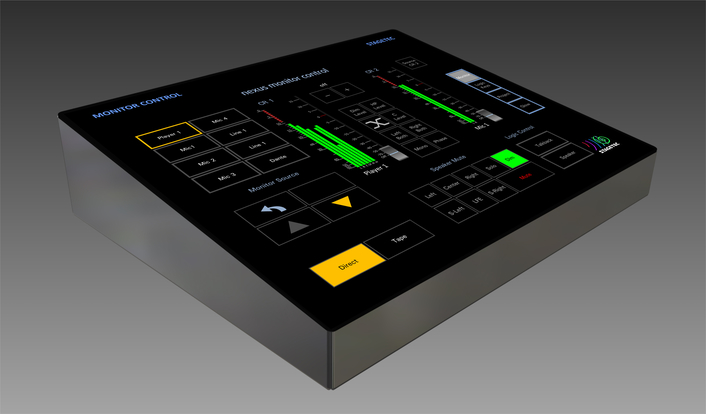 The controller enables signal source selection, monitoring volume adjustment, choice of alternative loudspeakers and much more. It replaces an independent fully-fledged monitor controller unit. With a touchscreen the system also provides extensive access to the Logic Control functions integrated into NEXUS. In the most basic application they can start a player but they can also provide full duplex communication and more complex functions.

The interface consists of a precision multi-touch screen with a custom-designed GUI that enables rapid and intuitive operation. Another advantage of a GUI-only interface is that the NEXUS Monitor Control is extremely adaptable.

The NEXUS Monitor Control does not require an operating system, making it very fast. It responds to the user's operations in virtually real time and is without parallel in the world of digital technology.

NEXUS Monitor Control gives access to all the signals of the entire NEXUS network. A CAT cable to the corresponding control board in any NEXUS Base Device within the audio network is the only connection required. Even if the connection is interrupted, audio settings are retained and monitoring of the selected signals continues since the audio processing necessary takes place within the NEXUS as usual.

NEXUS Monitor Control will see its first use at Bavarian broadcaster Bayerischer Rundfunk in Munich, in the Radio Drama Studio 9. It is planned to go into operation in the first quarter of 2015.