NewTek's Third Annual Broadcast Minds on the Future of Television 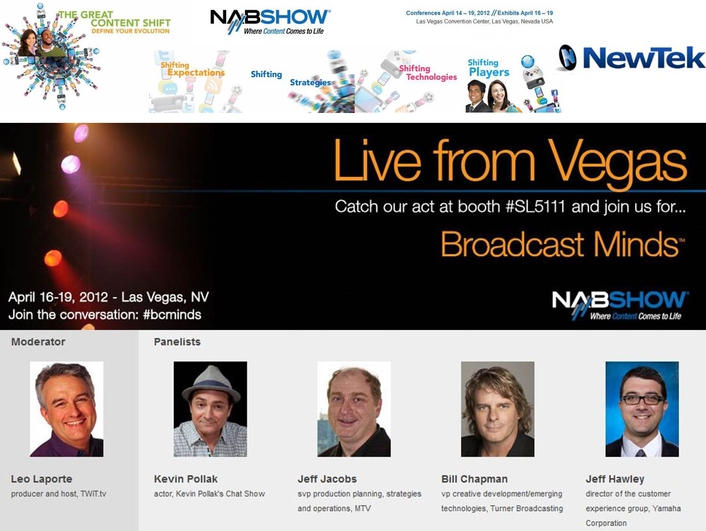 With a reported 179 million people in the U.S. watching nearly 38 billion online videos in February 2012 alone, Broadcast Minds brings together some of the world’s most influential people who are successfully producing original television for broadcast over the Internet—and building loyal viewing audiences across the globe.

“Television viewing is no longer a network programmed event that happens in the living room. People expect to be able to watch what they want, whenever and wherever they want—and maybe interact with show creators,” said Kevin Pollak, award-winning actor, comedian and host of Kevin Pollak’s Chat Show and Talkin Walkin. “I love that it's so easy to make and distribute my own show, completely on my terms. For anyone who wants to learn how to produce online TV, Broadcast Minds is a can’t miss event. I’m looking forward to meeting up with this group to share what we’ve discovered—and where things go from here.”

NewTek’s Broadcast Minds examines the massive shift in the way people consume television content online, explores insights on how to professionally produce network-style television programming for the Web, and provides technical expertise for anyone interested in learning how to stream live video. In 2011, the standing-room only event was viewed live online by more than 50,000 people.

This year, NewTek has established an online conversation destination for Broadcast Minds on Twitter, using the #bcminds hashtag, where the greater community can share thoughts about creating online television and best practices for how to stream live video. The panelists will monitor—and periodically join in—the online discussion. Moderator Leo Laporte will also use the online thread as an open forum where people can submit questions for the panelists to answer during the April 17 event.

“The continued shift in online television viewing habits is driving transformative change in the broadcast industry—and storytellers of all types are responding by delivering compelling, HD-quality content that could previously only be found on a major network,” said Carter Holland, executive vice president of marketing for NewTek. “With Broadcast Minds, we’re exposing the world to movers and shakers who are producing some of the most engaging, innovative forms of online television out there. From sports and entertainment broadcasters, to major corporations and celebrity independent producers, this year’s discussion will dispel the myths behind creating online television—and inspire anyone with an idea to see how easy it is to get in the game. We’re looking forward to a stimulating dialogue at the event itself—and online.”

Broadcast Minds will take place at the Renaissance Las Vegas Hotel on Tuesday, April 17 from 6-8pm PT, and will also be available for live viewing on the Web. While in-person seating is limited, registration is open to the public at www.newtek.com, where viewers can also watch the live video stream of the event.