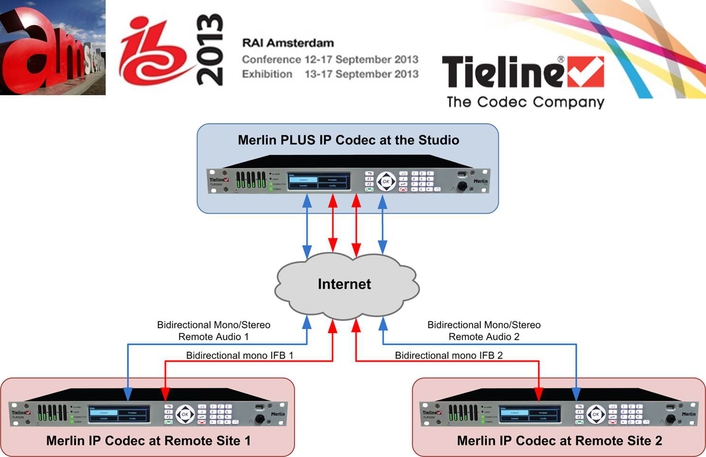 Tieline will be on show at IBC 2013 at stand 8.E73
Tieline today released v.2.6.22 software which enables Merlin PLUS and Merlin PLUS WheatNet-IP codecs to simultaneously create two bidirectional mono or stereo remote connections with a separate bidirectional IFB connection. This software upgrade also allows Merlin codecs to run a single mono or stereo remote with a separate IFB connection.

Merlin, Merlin PLUS and Merlin PLUS WheatNet-IP codecs are designed specifically for managing remotes and many broadcasters require full duplex communications and bidirectional program audio between the studio and remote sites. This release meets these expectations and all codecs are compliant with I3P EBU3347 requirements for interoperability of AoIP production intercoms.

Merlin PLUS and Merlin PLUS with WheatNet-IP are also the first broadcast codecs capable of delivering 6 simultaneous bidirectional mono IP connections to remote Tieline codecs or smartphones using the Report-IT Enterprise application.

Software release v.2.6.22 is a free upgrade and is available for download from http://www.tieline.com/Support/Latest-Firmware. A software upgrade with minor enhancements is also available for the Genie range of IP audio codecs.

Tieline is the Codec Company – a broadcast equipment manufacturer specialising in digital audio codecs for 24/7/365 STLs, audio distribution and outside broadcast contributions is renowned for delivering many industry firsts. Its most recent is support for the new OPUS algorithm among a number of its codecs.  Moreover, Tieline has been a part of major international sporting events such as the Torino and Vancouver Winter and the London and Beijing Summer Olympics and was instrumental in providing the audio to the world’s largest broadcaster.

With thousands of Tieline codecs in use every day at studios around the globe it’s a testament to Tieline engineering-orientated philosophy, with 70% human resources focused on developing and manufacturing hardware and software in house, with a strong emphasis on quality control.  Each PCB that comes out of Tieline’s in-house PCB plant passes through the hands of one of Tieline’s own engineers and is thoroughly quality and performance tested before shipping.

Merlin, Merlin PLUS and Merlin PLUS WeatNet-IP codecs will be on show at IBC 2013 at stand 8.E73