The HD modification of control room 13 was finished by early April 2011
The new control room (number 13) of the Magic Media Company (MMC) was first used for an HD production at the recording of the SAT.1 quiz show The Big General Knowledge Quiz. On May 9 and 10, 2011, two episodes of the quiz show, hosted by Johannes B. Kerner, were recorded in MMC’s stage 36.

Control room 13 is the second high-definition control room at the Coloneum studio lot. The HD control room 11 has been in use since April 2010. Control room 13 had its premiere with the live broadcast of RTL II’s Big Brother kick-off show on May 2, 2011. Since then, the finale of The Biggest Loser (on channel: kabel 1), among other shows, has been recorded using control room 13.

The HD modification of control room 13 was finished by early April 2011. The modification was completed in only 11 weeks by MMC’s planning department, led by Martin Späth, Head of Services & Development. 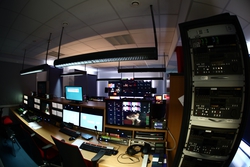 For recordings, there are 10 HDCAM VTRs available (optionally XDCAM, HDCAM, or HDCAM SR). Alternatively, a SAN-based Grass Valley Summit production server can be used with direct connection to MMC’s own post-production.

For audio processing, control room 13 is equipped with a LAWO mc²82 audio mixer. Control room 13 is linked to two additional control rooms at the Coloneum studio lot. Riedel’s Artist system is used for the intercom. In addition, there is a Clear-Com FreeSpeak full-duplex radio system available, as well as a common-frequency broadcasting system with full coverage of the Coloneum site. 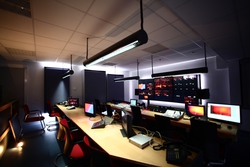 The design of the new control room 13 is remarkable because of the generous space it affords for production and editing staff.

In addition to modifying control room 13, MMC has also invested heavily in additional production equipment. Thus, several cameras of the Grass Valley LDK 8000 elite type, including the camera lenses (amongst others 1x72) have been acquired, as well as Sony PDW-HD1500 XDCAM VTRs, teleprompter systems, and HD editing suites by AVID.