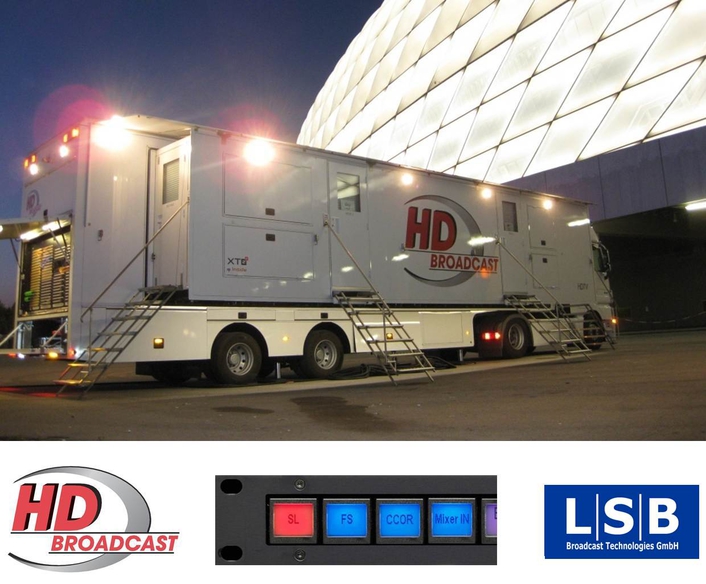 HD Broadcast HD OBVan in front of the Allianz Arena in Munich
The Virtual Studio Manager (VSM) is the control system that HD Broadcast has employed in the new 3D ready OB van. Together with project engineers at L-S-B Broadcast Technologies GmbH, the system integrator company Broadcast Solutions put the new 16-camera OB truck into operation at the end of July. The fully digital truck, which has been showcased at the IBC 2010 in Amsterdam, is designed for outside and studio productions in HD.

Depending on the application, two different HD/SD programmes can be produced simultaneously in the two independently working production areas. The production and transmission equipment can cope with the requirements of future 3D productions.

A medium sized VSM control system is used in the new 3D ready OB van. This means that up to 3,072 signal paths along with their parameters can be managed with one single system. The VSM controls the Snell video router Cygnus with 299 inputs and 528 outputs, two Kahuna multiformat vision mixers, the Lawo audio console mc²66, Miranda multiviewers as well as Penta HD2line displays. In addition, the superordinate control system provides gadget, Tally and GPI/O management. Further VSM functionalities such as Views and Storage Groups, Virtual Signals and Pseudo Devices support the OB Van team before and during the production with quick and easy preparation as well as flexible adaption to the production environment.

Visualised Workflows for every Operating Philosophy

For operating the most important components in the OB truck, L-S-B has delivered more than 25 hardware panels to Broadcast Solutions. In combination with the client application vsmPanel, the VSM control system also provides numerous freely configurable software frontends. This enables exact workflows, which are necessary in the new HD Broadcast OB van, to be displayed in a well-arranged and user-friendly way. The load balancing of the redundantly designed multiserver system guarantees availability at the highest level: In case one server fails, another server in the cluster seamlessly takes over its functions. This makes the IP based VSM control system the most flexible and at the same time safest control solution for changing production requirements.

The OB van is built on a trailer that is twelve metres in length and has a continuous 1.3 metre retractable drawer. The layout includes one audio and one vision area, two video areas, and a central equipment area. There are 25 work spaces available in the OB van. In the tender truck, which is completely networked with the OB van, an additional eight work spaces can be found as well as nonlinear-editing capacity.

“Our customers have already started thinking about 3D sport productions and we are sure that further events will also soon be produced in 3D. This is why it only makes sense to prepare all new OB vans for 3D,” says Stefan Breder, Mangaging Director of Broadcast Solutions. “With its first productions, the OB truck has gone through its baptism of fire; we have already produced German cup matches, matches of the second and third soccer leagues as well as the outside bet of the TV show “Wetten dass”,” says Constantin Novotny, one of the Managing Directors and Technical Manager of HD Broadcast.

L-S-B Broadcast Technologies GmbH is the global leader in advanced mobile audio and video broadcast controls. The core product of the Bingen (Germany) based company is the Virtual Studio Manager (VSM), an IP based, overall control system. Since the VSM is able to control manufacture-independent all broadcast devices it provides a flexible and powerful one-stop solution for all broadcast challenges. Together with the configuration software vsmStudio the VSM makes a variety of hardware and software front-ends available for an unlimited number of users. That way complete studios, master control rooms and mobile trucks can be equipped and managed with one single system.
Customers of L-S-B include the NDR, proSieben Sat. 1, Deutsche Telekom, T-Systems, N24, n-tv, and further numerous radio and TV stations all over the world. Founded in 2003, the mid-sized company has access to an optimally positioned global sales network. A staff of 20 people is employed for management, realisation of projects, service, training, soft- and hardware development and production at the headquarters in Bingen in Rhineland-Palatinate. Additional training rooms and the company administration are situated at the new Training Centre in Wiesbaden.