RPU3, RVI3 and Eos v2.0 software announced
ETC’s Eos family of lighting control systems is popular the world over. From Broadway to the school theatre, and the West End to the local church, Eos line products are the trusted tools of designers and programmers of all experience levels. Now ETC is adding even more gear to the family, by introducing the new Eos Titanium (Ti) control desk, along with two new accessories: the RPU3 (Eos Remote Processor Unit 3) and Net3 RVI3 (Remote Video Interface 3), and offering new Eos v2.0 software.

Ti takes the place of ETC’s flagship Eos desk at the head of the product line, with new hardware and features that make designing and programming even easier. “We took the solid foundation of Eos and built on it to create Ti,” says ETC Controls Product Manager Anne Valentino. “We added hardware adapted from the design of our Gio desk, such as integrated, articulating, multitouch displays, backlit keys and an anodised finish.

The common-sense programming syntax that the Eos family is known for is at home in Ti. ETC Entertainment Market Manager Matthew Armendariz-Kerr explains: “Ti speaks the designer’s language – the ‘language of light’ – which both professionals and novices can understand.” Users can work from an abstract concept of a design or a straightforward command sequence. Ti’s command line is fully integrated with direct selects and magic sheets, allowing seamless work from the keypad and the touchscreen controls.

New Net3 Remote Video Interface and Remote Processor Unit
The new Net3 RVI3 can be used as an accessory to Ti and other desks in the Eos line of controls, offering remote video and local programming functions. The rack-mountable RVI3 allows for up to three DVI/SVGA displays with just video or single- or multitouch support, stretching a user’s programming surface even further. It includes 20 user-definable buttons, a power switch and a USB port. 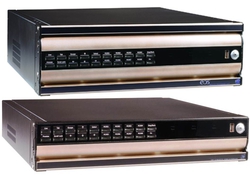 ETC is also upgrading the Eos RPU, a handy tool used with Eos-family systems. The new RPU3 allows for the use of three external DVI/SVGA monitors, which can be single- or multitouch displays or just traditional DVI video. The RPU3 can be used as a primary, backup or client processor, or a stand-alone lighting playback unit in Ti, Eos and Gio systems. The 2U device has two DMX ports, a phone remote connector, contact closures and Midi In and Out, as well as two individually configurable network interfaces.

Eos v2.0
In addition to the three new products, ETC is releasing a new software version that brings new functionality to Eos-line control products. “Eos v2.0 introduces a new magic sheet function, which lets users set up customised, interactive live/blind displays,” explains Valentino. “Users can use the magic sheets to organise and work with channels in our traditional tombstone view or via channel symbols. They can select channels and play back palettes, macros and much more. User-defined symbols, images and background graphics may be imported and stored with the show file. It makes programming a breeze.”

Eos v2.0 also revises device management, using a new Device List display in patch. This allows for remote configuration of ACN devices, such as Sensor3 power control systems and RDM devices like Source Four LED and Selador Desire luminaires or any other RDM device supported by the discovery process.

A video demonstrating the benefits of ETC’s new Ti control desk, RVI3, RPU3 and Eos v2.0 software is available on ETC’s website, www.etcconnect.com, where you can also find details on ETC and all its products.