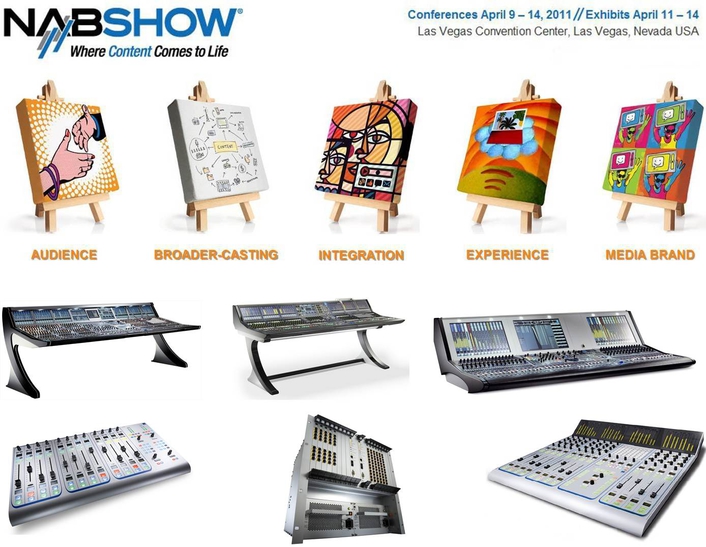 mc² consoles with Loudness Metering in Las Vegas, April 11-14
Loudness metering, the latest feature of Lawo mc² consoles, will be demonstrated at the company’s booth C2628, in the Central Hall at this year’s NAB show. Following EBU R128 and ATSC A/85 specifications, and based on ITU1770, the mc² series will feature loudness metering for every channel. The metering is shown in the Channel Display and the GUI Main Display; a permanent display of the integrated measurements is provided within the GUI. This is a first within the Lawo product range and a world’s first for production consoles — a mc² series console offering integrated loudness metering.

Additionally, visitors will be able to familiarise themselves with Lawo’s V4.12 software release, which will be demonstrated on the mc²66 MKII and the mc²90 consoles. This new software release provides many new features such as AMBIT — the powerful DSP module that facilitates the upmix of stereo sources to fully-fledged surround signals. For hands-on experience, a mc²56 mixing system will be set up on the Lawo booth.

Lawo will also introduce the Lawo Remote App at NAB 2011. This app for the iPhone, iPad and iPod Touch can remote control faders, load snapshots and trigger many custom functions such as ‘Routing Connects’ or GPIs. Furthermore, the iPhone can become an additional user panel for Nova73 HD routing systems and mc² consoles.

Also on show will be Lawo’s Plug-in Collection. Lawo plug-ins enable users to experience the renowned benefits and audio quality of Lawo’s mc² series on their own digital audio workstations (DAWs).

For the first time at a US trade show, Lawo will introduce the newest member of their on-air radio and TV broadcast console family — the sapphire. This system offers desirable functions and proven Lawo technology in an innovative new design.

Lawo will also be demonstrating the new Nova29, a compact 16-port MADI router, which delivers transparent signal routing for 1024 x 1024 signals, an integral intercom function, and many easy-to-maintain features. The Nova29 can be used as a stand-alone unit with third-party equipment or networked seamlessly with Lawo on-air consoles, enabling surprisingly homogenous studio networking.

The high-performance Nova73 HD router, with a capacity of 8192² I/O and fully redundant design, will also be on show. This routing system is the perfect solution for decentralised network structures via SDH, and for particularly demanding situations with regard to reliability and on-air operation. The Nova73 HD router’s mxGUI software fully supports users in signal distribution and control. The new 4.12 software release provides access to the router Lawo’s Remote App, and enables user buttons to be easily configured. An additional overview will cover the benefits of advanced HTTP I/O.

Lawo’s crystal console, designed for on-air radio and edit suite applications, will be shown at Las Vegas in its 8-fader version.

Lawo will be presenting itself as a RAVENNA partner. Visit the Lawo booth to learn more about this exciting new technology for the distribution of audio and other media content in IP-based environments.

Lawo, headquartered in Rastatt/Germany, specialises in developing, designing and manufacturing mixing consoles and matrix systems for radio and TV broadcasters, as well as for use in live events. Standards of high quality and innovative technology are supported by decades of experience in the field of professional audio technology. The company celebrated its 40th anniversary in 2010.Lawo’s product range covers digital audio mixing consoles for use in radio, broadcast, production and live applications, including the required software. In addition to the provision of matrix systems and audio networks, Lawo also carries out project engineering tasks and acts as a main contractor for radio OB trucks; these services include user training and maintenance. This high level of expertise results in a comprehensive support service for Lawo customers.