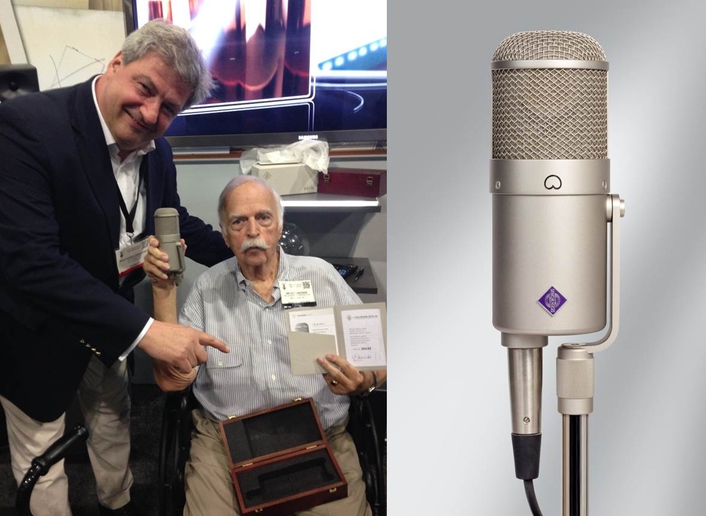 Swedien, who counts the recording and mixing of Michael Jackson's Thriller album among the highlights of his lifetime of career accomplishments, was presented with serial number 82 of the U 47 fet Collectors Edition, in honor of the year that the Thriller album was released to the public. The presentation was made by Neumann President Wolfgang Fraissinet at the Neumann booth on Friday, October 10th.

The original U 47 fet was used extensively by Bruce Swedien throughout the recording of Thriller, so the event was especially fitting as Neumann launched its new U 47 fet Collectors Edition to a new generation.

Wolfgang Fraissinet commented: "It is a very special honor for our company to honor Mr. Swedien in this way. He has not only left an indelible mark on the recording community at large, but his contributions to the recording of Thriller and countless other recordings have had a tremendous influence on our culture."

The Neumann U 47 fet microphone was iconic in shaping the sound of the '70s, '80s and beyond. As the transistorized successor of the U 47, it permitted the processing of very high sound pressure levels for the first time, and engineers were able to place it directly in front of extremely loud sound sources such as guitar amplifiers and kick drums, as well as in front of more delicate sources such as vocals and acoustic instruments. The combination of the U 47 fet's ability to capture high sound pressure levels and the unique capsule design derived from its famous tube-based predecessor, the U 47 fet contributed to many legendary recordings.

Now, the U 47 fet Collectors Edition has been faithfully reproduced using the original production documents and schematics. The Collectors Edition is supplied with a high-quality wooden case with special packaging, and an individual certificate with the serial number of the microphone and signature of Neumann President Wolfgang Fraissinet.

About Neumann
Georg Neumann GmbH, with its headquarters in Berlin, Germany, is well-known as one of the world’s leading manufacturers of microphones. The company, which was established in 1928, has a long track record of world-leading product designs and has been recognized with a string of international awards for its technology innovations. From 2010, Neumann offers this expertise in electro-acoustic transducer technologies to the studio monitoring market, and will provide optimum solutions to its customers in the areas of TV and radio broadcasting, recording, and audio productions. Neumann is now the perfect partner for both the input and the output of the audio signal path. Neumann has manufacturing facilities in Germany (microphones) and Ireland (loudspeakers), and is represented in over 50 countries worldwide by Sennheiser subsidiaries, as well as by long-term trading partners. Georg Neumann GmbH is a Sennheiser Group company.

The Neumann U47 fet is Back!
KH 420 – The First Midf...ield Monitor From Neumann
AMP VISUAL TV Millenium Signature 10