In addition, because VSM integrates directly into the existing infrastructure in the truck it is able to assume management of already installed 3rd party control panels, making it a truly unique, entirely central, umbrella control system. The first production supported by SS22 utilizing its new VSM technology was coverage of the PGA Championship golf tournament in August 2013.

Growing directly from the requirements of the mobile production truck application, over the past decade L-S-B has established VSM as the leading umbrella Control System in European mobile vehicles. Over the past several years L-S-B has consistently expanded, offering VSM in new markets around the world that include: China, Russia, Korea, the Middle East, Australia and New Zealand.

As part of an initiative to bring VSM to the United States market, L-S-B partnered with NEP to install the system in SS22, one of their flagship HD production trucks. NEP’s top engineering team worked closely with L-S-B to tailor the system to their unique needs. NEP is the leading international provider of outsourced television production services in the industry. They have the largest fleet of mobile production trucks in the world, including over 60 HD production trucks and a full line of SD, edit and support trucks. 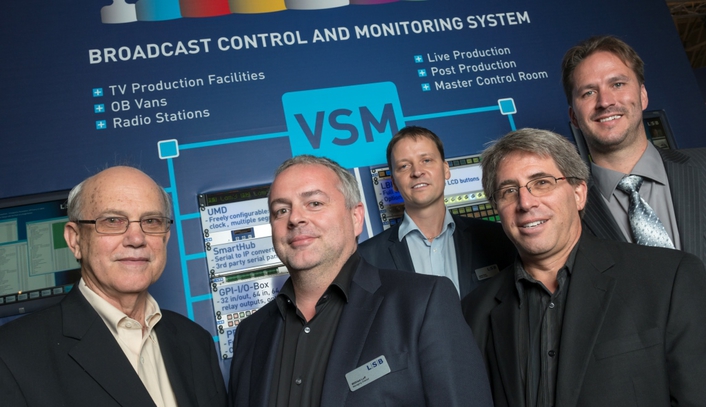 Joslin explains: “Our goals are centred around improving the efficiency of configuring complex and disparate systems. To many, the idea of being able to separately RECALL configurations for various systems in the mobile unit from a previous show is the goal, but that doesn't go far enough. VSM offers one central and efficient tool for setting up the entire, immensely complex network of systems in a mobile unit that is agile enough to meet each client’s unique needs, while translating those demands into a "ready to go" state in the fewest steps possible. Additionally, VSM had great appeal to us because the variance of vendor equipment across our entire fleet means that a universal control system eases training, support and collaboration of innovative methodologies.”

“VSM is the first system that provides a rich toolset to offer these extensible interfaces for use in the ever changing, demanding mobile unit environment. With the wealth of protocols and experience that LSB has developed working with equipment manufacturers for many years, they have made a central model of control, with flexible combinatorial logic, a reality,” Joslin adds.

NEPs SS22 mobile production truck includes PESA routers, a GVG Kayenne Switcher, Harris Multiviewers, a Calrec Audio Console, an RTS Intercom system, Cobalt and AJA processing technology. VSM talks directly to all these components, providing a single toolbox that is able to create control user interfaces and logic, greatly simplifying many tasks. In SS22, VSM handles all router control, interfacing directly to the PESA Audio and Video routers, as well as interacting directly with the Calrec Audio console. Because VSM is integrated directly into the truck’s existing infrastructure, it is able to talk directly to the already installed PESA panels with no need for the native controller.

George Hoover, NEPs CTO, who was also central to the LSB partnership development, adds:
“VSM is an amazingly powerful product with many layers of capabilities. The team from LSB work extensively with our engineers and operators to help us use VSM to its full capability. The LSB team knows and is very experienced in remote broadcasting, so their credibility was quickly obvious to our staff - these guys know their stuff and how it can be used to its fullest potential. I can't say enough about the capabilities of the software developers as well, their ability to reliably control other manufacturers’ devices is fantastic.”

About NEP
With the world’s most advanced equipment, largest fleet of mobile units and global production studios to suit every genre, NEP enables its clients to execute, deliver, and display exceptional productions on any platform around the world. For more than 30 years, NEP has ensured its clients’ success by delivering superior service and building lasting relationships with a passion for continuous innovation. NEP’s talented staff is committed to acting with integrity and working as a team to deliver comprehensive solutions for remote production, studio production, video display, webcasting, and power generation that set the global industry standard.