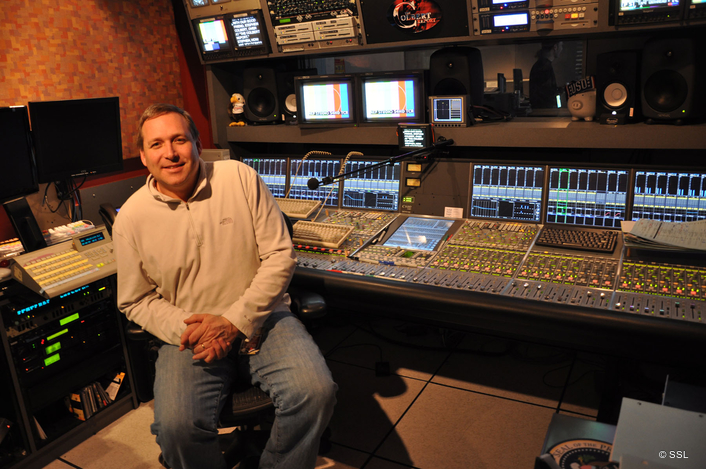 Todd Kilponen, audio mixer for The Colbert Report
NEP Studio 54 recently installed a 48-fader, Solid State Logic C100 HD console to handle the audio for Comedy Central’s popular The Colbert Report. NEP has upgraded two studios for full HD production, Studio 52, where Comedy Central’s the Daily Show with Jon Stewart is produced, and, most recently, Studio 54. The success of the C100 HD in Studio 52 inspired the purchase of a second SSL for Studio 54.

“The production company for the Daily Show with Jon Stewart was thrilled with the SSL experience in Studio 52, so when it came time to upgrade Studio 54 for The Colbert Report, they chose to use another C100 HD,” says George Hoover, chief technology officer for NEP. “We have used the original C100 HD for over two years and are very happy with the results, especially with the music segments and the capability of 5.1 surround mixing. The C100 HD interfaces with our Pro Tools® system so we can go back and forth to do fairly sophisticated audio posting on the segments for DVD release. Now we have this capability for The Colbert Report.”

The video and audio control rooms for The Colbert Report live three floors above the production studio. The C100 HD is interfaced directly into the console’s pre-amps to pick up the microphones from the studio floor. The console also interfaces to the rest of the studio system for playback elements, protocols, multitracks and the like.

“We used to use a fairly straight forward analogue console, but we really needed the power we have with the C100 HD,” Hoover continues. “We try to get as accurate a show as possible on the first pass, so the recall function on the C100 HD becomes very important for the multiple segments we need to record. Our engineers can now fine tune a mix for a band during rehearsals and then recall the setups for the actual tapings. Having this capability minimizes mistakes and gives us a much better, repeatable quality.”

The Colbert Report is essentially a sitcom that gives the appearance of being a traditional newscast. The addition of music performances demanded a higher quality sound.

“We needed a really good, warm sound and the C100 HD gives us just that,” states Hoover. “Our music producers who come into the show are used to working on SSL consoles, so they’re immediately comfortable with the setup in the room. The artists also bring in their own engineers, and, again, the SSL is a known factor. The C100 HD is technologically light-years away from the analogue PA desk that had been used for years. Our engineers can now concentrate on creativity and not worry over how to just get a show done. The C100 HD is the right tool for this job.”

Solid State Logic is the world’s leading manufacturer of analogue and digital audio consoles and provider of creative tools for music, broadcast and post production professionals. For more information about our award-winning products, please visit: