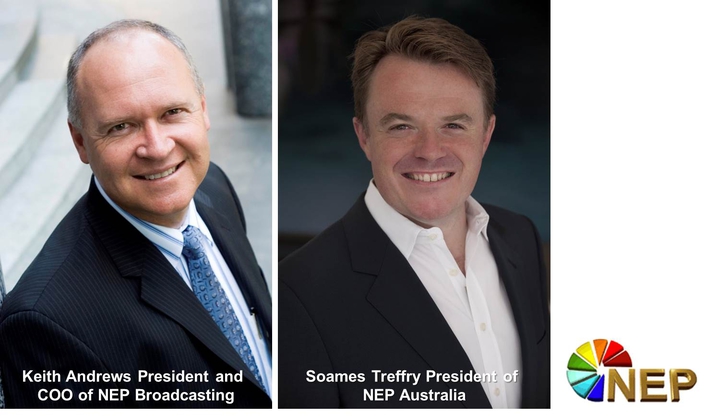 Mr Andrews takes on responsibility for the Group’s outside broadcasting, host broadcasting and studio operations in the US, Europe and Australia.

He will relocate from Sydney to NEP’s headquarters in Pittsburgh, PA, USA next month and report to NEP Group CEO, Kevin Rabbitt.

Concurrently, Soames Treffry, NEP Australia’s Director of Commercial and Television, has been promoted to President of NEP Australia, reporting to Mr Andrews.

NEP Group CEO Kevin Rabbitt said: “Keith is an exceptionally talented leader, and brings global experience from both the broadcast and IT industries to this new role. I am excited to work with him to continue to grow our broadcast business around the world.”

Mr Andrews said: “It has been my great privilege to lead the NEP Australia team through five years of local and international growth. It is a credit to our team that our business has done so well and is regarded favourably by clients and the wider marketplace. I look forward to continuing to champion their efforts while working with Kevin and my NEP worldwide colleagues to drive further growth.”

Mr Treffry said: “We’ve got the best people and I am really looking forward to the opportunity to lead them in our mission to deliver outstanding innovation, customer service and value for our clients. I bring great enthusiasm and passion for television that as a company we’ll bring to every project. It’s an evolution not a revolution. I’m really excited about what the worldwide NEP network can do for our customers.”

Mr Andrews has been CEO and Managing Director of NEP Australia since March 2010. Before that he had an extensive international career, primarily in  technologyrelated ventures. He has been a director of several private and publicly- isted technology companies, including six years in various executive roles with NYSE listed Stratus Technologies in the US and Asia.

Mr Treffry joined the company in February 2012 as Director of Television and Commercial from FOX Sports, where over 16 years he held a variety of production, programming and promotional roles, culminating with Director of FOX Sports Channels.

About NEP
For over 30 years, NEP has been delivering expertly engineered solutions for outside broadcast, studio production, video display, host broadcasting and post production. With a worldwide network that includes the most advanced equipment and largest fleet of mobile units available, as well as global production studios to suit every genre, our talented team of experts work together to deliver superior service to every client. Driven by passion and a focus on innovation, NEP has supported productions in over 40 countries on all seven continents, and has set the industry standard for excellence.

About NEP Australia
NEP (formerly Global Television) is Australia’s largest and most experienced outside broadcast and studio facilities company, providing broadcast infrastructure for major sport and studio productions across the country and internationally. NEP facilitates more than 2,000 hours of Australian broadcast television each year, including live sport (NRL, AFL, Cricket), popular series and drama (My Kitchen Rules, The Voice, Big Brother, Neighbours) and live entertainment and event programs (Dancing with the Stars, The Footy Show and the annual Logie awards). The company is also internationally recognised for its technical expertise in host broadcasting and major events, managing complex projects including the 2014 Glasgow Commonwealth Games and 2014 G20 Leaders’ Summit. NEP Australia is wholly owned by NEP Inc.