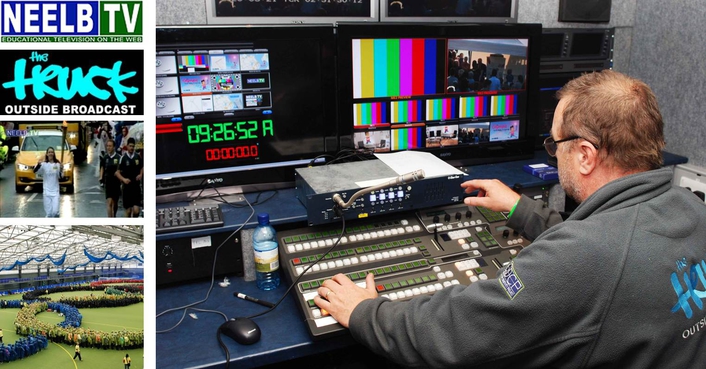 Coverage of the Olympic Torch procession and world record-setting formation of the Olympic rings
When the Olympic Torch was carried through the small town of Magherafelt in Northern Ireland on June 7, the North Eastern Education and Library Board (NEELB) covered the event with a two-hour live production that was anchored by a Broadcast Pix™ Granite™ 5000 Video Control Center™. Streamed live to www.neelb.tv, the program was also displayed on large public screens in the town centre as well as in nearby Belfast and Derry.

The show began with coverage of a Guinness world-record event, as more than 3,000 children representing 31 schools created the Olympic rings at a local arena. The students then lined the streets for the torch procession. According to Peter Simpson, manager of neelb.tv and director of the production, nine cameras were used during the shoot, including a helicopter-based camera for aerial footage of the record-breaking rings formation.

A studio was constructed in a local church hall, equipped with three robotic cameras that Simpson controlled through the Granite in neelb.tv’s production truck. Coverage also featured two roving reporters stationed near three microwave links positioned along the route. A 30-minute edited highlight program is available on the Web site, and the complete program will soon be available on DVD from Magherafelt District Council.

“It absolutely poured down from early morning, so we were extremely skeptical from the outset,” Simpson recalled. “We deployed three of our microwave links. Two worked perfectly and one died mid-program. We were running ISOs in all the cameras anyway – as a DVD of the event is now being created – so we just lost the live.”

Granite’s 2 M/Es were useful for setting up composite shots, and Simpson said the integrated Fluent™ workflow tools were used extensively during the production. The Fluent-View integrated display fed two 32-inch monitors in the truck, Fluent Clip Store was used for playback of pre-recorded packages, and graphics were produced with the built-in Harris Inscriber CG.

Simpson said the Broadcast Pix system was “perfect” for the production. “Not only was I able to operate all these things from one location, but I could also control the three robotic cameras in the studio,” he explained. “It was the only integrated production system that we could both afford to purchase and that one person could operate to produce a highly polished live program of such complexity.”