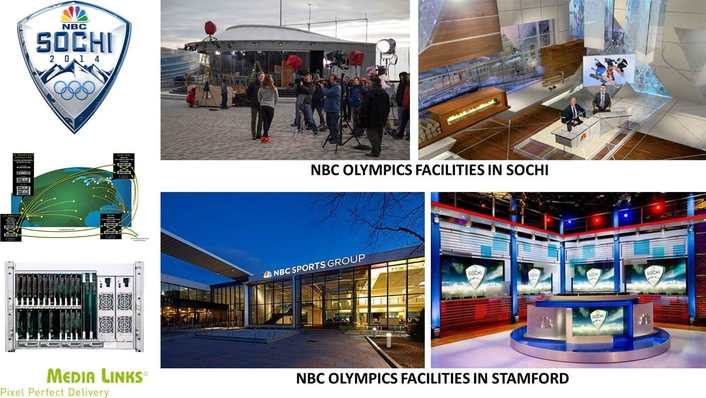 MD8000 Media Transport over IP Solutions enabled NBC Olympics loss-less video delivery and hitless switching during the coverage
Media Links Inc., a wholly owned subsidiary of Media Global Links, the market leader in broadcast and network solutions for media over IP, was selected to provide its Media Transport solutions to NBC Olympics, a division of the NBC Sports Group, during its production of the 2014 Olympic Winter Games in Sochi, Russia, from February 6-23. The announcement was made by David Mazza, CTO and SVP, NBC Olympics, and Tom Canavan, President, Media Links Inc.

The video transport of NBC's Olympic coverage, as well as all the bi-directional feeds for all of NBC Universal's networks and broadcasting partners, were managed by the MD8000 transport solutions. The MD8000EX, 24-port/7RU chassis' and MD8000, 9-port/4RU chassis' located at the Sochi International Broadcasting Center (IBC), transported JPEG2000 HD content to NBC's new Stamford, Connecticut sports facility, and New York City's 30 Rock. MD8000 systems were also housed at the NBC Stamford and 30 Rock locations for receiving content, as well as at several network partner locations throughout the U.S. supporting the exchange and contribution of the Olympics coverage.

Throughout the Games, NBC Olympics was able to maintain a consistent, high-quality video experience for its network partners and customers. The Media Links transport over IP solutions effectively and efficiently transported large packets of video, audio, and data content to connected venues with 100% uptime. Even during moments of network issues, the Media Links proven hitless switching technology prevented packet loss, resulting in zero dropped video packets during the entire Olympics event.

JPEG2000 offers a solid solution to transport 3G/HD/SD-SDI as well as DVB-ASI signals over the terrestrial network utilized for the Olympics. The contribution quality of JPEG2000 compression ensures extremely high quality video, audio, and data is transported in IP packets between all of the NBC Network and partner locations on the IP network.

The MD8000 system is scalable and modular, which means the configuration of the system is matched to the demands of a specific event, production, or content delivery requirement. Robust redundancy with a hitless operation, low-latency, bi-directional operation, and ability to operate with a variety of compression schemes, supports its strength as a transport platform that guarantees quality of service.

"We are honored to have been chosen by NBC Olympics as its media transport solutions provider," comments Tom Canavan, President of Media Links, Inc. "The NBC Olympics workflow is groundbreaking and we are proud to be a part of this next-generation transport infrastructure. Our solutions are proven in the field for their hitless operation and for offering a high level of flexibility and signal integrity for all types of video, audio, and data transport over IP applications."

"Mazza" said: "We were really impressed with the rock solid nature of the entire Media Links system. All of our JPEG2000 and ASI video landed at the various drop point in the USA without a single hit. All this while transiting an IP network that was quit complex, and had a tremendous number of provider handoffs as it made its way from Sochi to the USA. This allowed us to bring ever more coverage to our viewers watching the Games on the networks of NBCUniversal."

The MD8000 has evolved into a much sought after solution that supports the evolution of broadcast delivery over IP/Ethernet. It is being deployed by large-scale Telco's and Broadcasters globally and has proven itself as an efficient, robust transport offering that can be deployed on a variety of network topologies that require high quality, pixel-perfect content delivery.

About Media Links
Media Links is a leading developer and manufacturer of broadcast network infrastructure and media transport solutions. Its mission is to offer broadcasters and network providers throughout the world leading edge technology, enabling them to economically convert and move the complete suite of broadcast signals - whether video, audio or data - onto their multi-service IP/Ethernet networks. Operating as a pioneer at the forefront of technological innovations and advancements, Media Links provides the only standards based product suite in the market that enables the adoption of media signal types to Telecommunication standards like Ethernet, IP, SDH and SONET.

Media Links solutions have proven themselves as efficient and robust transport technology in the field and in the studio. Leading broadcasters and network service providers throughout the globe depend on Media Links technology for all types of audio, video, and data transport applications. Media Links solutions and services have also been used in the most watched major sporting events throughout the world, like Super Bowl, Euro Cup, The World Cup and The Olympics. Media Global Links is the parent company of Media Links.