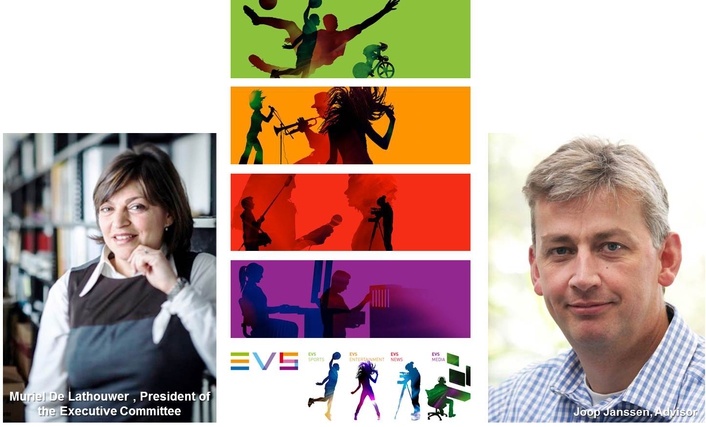 EVS announces the departure of Joop Janssen as Managing Director and CEO
In a meeting on October 10, 2014, the Board of Directors and Joop Janssen mutually agreed to end the term of the office and duties of Joop Janssen, managing director and CEO of EVS, due to differences in view about the implementation of the company’s long term strategy. This agreement is effective as of October 14, 2014, although Mr Janssen remains available as an advisor, allowing for a smooth transition.

“The entire Board of Directors would like to thank Joop Janssen for his work during the past two years. Under his leadership, the structure of EVS has been strengthened and professionalized, enabling the company to further grow in its four key markets: Sports, Entertainment, News and Media,” said Pierre Rion, Chairman of the Board of Directors of EVS.

The Board of Directors has launched the search for a new CEO. Muriel De Lathouwer, currently a member of the Board of Directors of EVS, chairing the Strategy Committee, is appointed as the President of the Executive Committee on an interim basis. “I have great confidence in Muriel De Lathouwer’s capacities to perform this task, in close cooperation with the management team in place,” Pierre Rion added.

During her career, Muriel De Lathouwer worked for Accenture, was Associate Principal at McKinsey and a member of the Executive Committee at Base (KPN). She is an Engineer from ULB (University of Brussels) and holds an MBA from INSEAD.

Prior to joining EVS, Joop Janssen was the Chief Executive of the Videocom division of the Vitec Group. During his nine years with Vitec Videocom he was the architect behind its significant profitable growth and brand expansion. Prior to that he was VP and General Manager of Phillips Broadcast (formerly BTS) North America where he was instrumental in the successful divestment to Thomson Multimedia and the subsequent acquisition of the Grass Valley Group. He has held senior and executive management positions including those at Philips Electronics Digital Networks in France and Philips Business Electronics in the Netherlands.

Muriel de Lathouwer is Managing Director of Ariade Carbone since 2012 (engineering consultancy firm in energy and environmental matters) and of MucH since 2010 (consultancy in marketing, strategy and sustainable real estate). She started her career as Consultant for Accenture, before spending 7 years at McKinsey in Brussels (she was Associate Principal between 2006 and 2008, specialized in telecom, high tech and media sectors). In 2008 and 2009, she was Chief Marketing Officer of BASE (KPN Group Belgium). She is an Engineer in nuclear physics (ULB, Brussels), and holds an MBA from Insead (Paris). She is a member of Women on Board (Belgian association gathering women who are members of Board of Directors), and a member of the Board of Directors of Amoobi, private start-up.

About EVS
EVS provides its customers with reliable and innovative technology to enable the production of live, enriched video programming, allowing them to work more efficiently and boost their revenue streams. Its industry-leading broadcast and media production systems are used by broadcasters, production companies, post-production facilities, film studios, content owners and archive libraries around the globe. It spans four key markets – Sports, Entertainment, News and Media.

Founded in 1994, its innovative Live Slow Motion system revolutionised live broadcasting. Its reliable and integrated tapeless solutions, based around its market-leading XT server range, are now widely used to deliver live productions worldwide. Today, it continues to develop practical innovations, such as its C-Cast second-screen delivery platform, to help customers maximise the value of their media content. The company is headquartered in Belgium and has offices in Europe, the Middle East, Asia Pacific, and North and Latin America. Approximately 500 EVS professionals from 20 offices are selling its branded products in over 100 countries, and provide customer support globally.