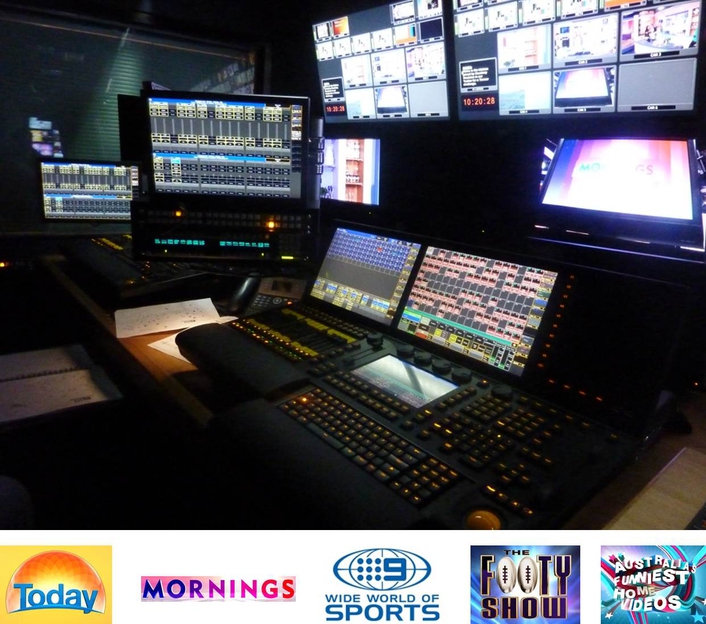 Purchased through Chameleon Touring Systems, the grandMA2 consoles choice was a bit of a ‘no brainer’
Channel 9 productions “Today Show”, “Mornings” and “A Current Affair” have recently moved into their larger Studio 22 at the Sydney Channel 9 premises to share the studio with “Wide World of Sports”, “Sunday Footy Show”, “Australia’s Funniest Home Video”, “The Footy Show” plus other shows. This studio can produce between 6.5hrs and 9hrs of live television seven days a week so with this in mind, the decision was made to upgrade of the studio control room.

As well as a new vision switcher, production area and studio floor upgrade, the studio control room now houses a brand new MA Lighting system comprising of two grandMA2 light consoles, a MA NPU (Network Processing Unit), a MA onPC command wing and a grandMA2 fader wing. The installation was completed in only a few weeks and training was given for those in the lighting department who had never used the grandMA2 before.

Purchased through Chameleon Touring Systems, the grandMA2 consoles choice was a bit of a ‘no brainer’ according to Stuart Anderson. The networking ability of the MA Lighting system allows multiple operators to use the consoles on back to back shows in the same studio. The grandMA2 consoles are also used for all their outside broadcast organized out of Sydney.

“I still had a good look at what was available on the market, but the main reason we chose MA Lighting was its’ networking ability,” remarked Stuart. “You can run our consoles at the same time as a tracking backup or a second user who can be checking the lighting for another show e.g. The ‘Today Show’ is still on-air as ‘Mornings’ is being set and the lighting checked as these shows follow each other on a daily basis. When ‘Morning’ starts they can simply swap over to the main console.”

When the studio is used for light entertainment shows such as “The Footy Show” or “Funniest Home Videos”, a lighting director operates the conventional lights on the main console whilst the moving lights and Pandora’s Box operator uses the secondary console. When there is only one lighting director, the secondary grandMA2 light acts as a backup console. Stuart particularly favours the User Profiles offered by the grandMA2 light console, a feature that is great for a console that has to cater to several operators. The “Today Show” has up to seven different lighting directors.

“We all have similar User Profiles but to be able to have the screens set up how you like is a really good feature,” said Stuart. “The versatility offered by the MA Lighting system is really good.” A grandMA2 fader wing was purchased for the operators who prefer to have ‘physical’ faders although Stuart feels right at home with virtual faders. “I’ve been using the virtual faders quite a bit,” he said. “On the ‘Footy Show’ all of the set dressings and audience lighting is on virtual faders on the screens.”

The MA onPC command wing is used as the floor console with two ELO touch screens. According to Stuart, as 90% of the shows are programed on the floor they needed the functionality of the bigger consoles.

“We don’t physically have room on the studio floor for another grandMA2 light console,” added Stuart. “But with the MA onPC command wing we can do everything we need to do. We don’t actually use the MA onPC command wing while we are ‘on-air’ but because of the networking ‘sessions’ we can leave it on and it does not affect the other consoles. We also have an iPad with the remote app to bring channels up and basic commands.”

The MA NPU is handling the main output for the system with an ELC 8-way Node acting as a redundancy. Two ELC 8-way Nodes are on the floor and a couple of three port ELC Nodes are portable around the studio.