MMC Studios Boosts Business and Continues On the Path of Success 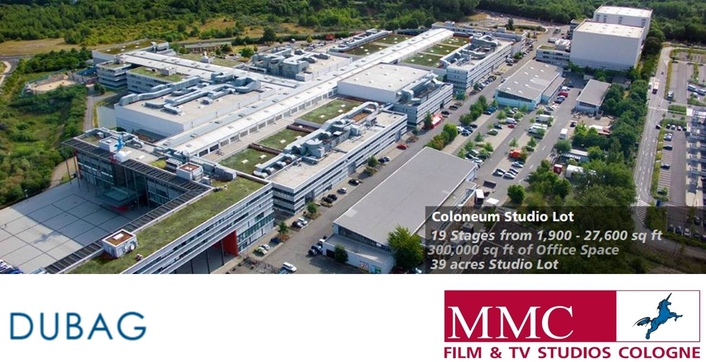 MMC has developed favorably over the past years. In 2012, the company performed well, despite the difficult market environment. Its strong market position in the TV sector shall be further expanded. Already, the MMC studios are the most important production site for TV shows and daily soaps in Germany. In addition, each year, half a dozen films for TV and cinema are created in the studios in Cologne.

The management crew is headed by Managing Director André van Eijden (age 60) and is reinforced by Friedhelm Bixschlag (46), who has been MMC’s Sales Director for many years,and Philip Borbély (38), as shareholder representative. Together with Bastie Griese (38), longstanding Head of Film Production, Borbély will also be MMC Movies’ Managing Director.

Van Eijden explains: “In 2012, MMC achieved a positive operating result of one million euros, and the outlook for 2013 is very positive, too.” Bixschlag adds: “From 2011 to 2012, we were able to increase the studio utilization by 10%.

Presently, it is also excellent and we are discussing the realization of very promising, new TV formats with customers.” In the future, MMC’s business sector “Film” will be managed by MMC Movies and will be further expanded. Apart from strengthening the classic range of services in the film sector, such as sound stages and production services, MMC Movies will position its production unit more strongly, increase co-productions, and internationalize by way of joint ventures.

Griese says: “I am very happy about this important step for MMC Movies. In the past weeks, we have worked intensely on concepts, which we can implement in the short term. The new ownership structure offers exciting new opportunities to realize further domestic and international co-productions in the MMC studios at short notice.”
The expansion of MMC’s two core areas “TV” and “Film” is also an important contribution towards securing the media location North Rhine-Westphalia and safeguarding the jobs there.

In the weeks to come, MMC will be present at various events of the film and TV industry. These include the “Great Drama Summit” in the MMC studios on May 8th, during the Cannes Film Festival (in the German Pavilion), the North Rhine-Westphalia Media Forum on June 5th to 7th, 2013 in Cologne, and the “Great Factual Entertainment Summit” in the MMC studios on June 5th, among others. Friedhelm Bixschlag looks forward to welcoming visitors and participants on site: “We are looking forward to discussions with colleagues from the industry.”

About MMC
Since 1991, MMC has offered optimal production conditions for film, TV, and event projects as an independent media center. In 1999, MMC has opened 19 TV studios and sound stages in Cologne-Ossendorf on a total area of more than 39.5 acres—making MMC one of Europe’s largest and most advanced TV and film studio operators.

Equipped with cutting-edge technology, the Coloneum is Germany’s most important production location for TV shows and daily soaps. For many years, major shows like “German Idol” (Deutschland sucht den Superstar), “Dancing With The Stars” (Let’s Dance), and “Germany’s Got Talent” (Das Supertalent), as well as daily soaps like, “Forbidden Love” (Verbotene Liebe), “Among Us” (Unter uns), and “All that Matters” (Alles was zählt) have been produced at the Coloneum.

Furthermore, several large film productions are realized at the Coloneum each year. One such film is the screen adaptation of the bestseller The Physician, starring Sir Ben Kingsley and Stellan Skarsgård. It will come to German cinemas in late 2013.
Hence, the MMC is an important pillar of the media location Cologne and North Rhine-Westphalia, and its significance goes far beyond. MMC has over 100 permanent employees and generated a turnover of 37 million Euros in 2012.