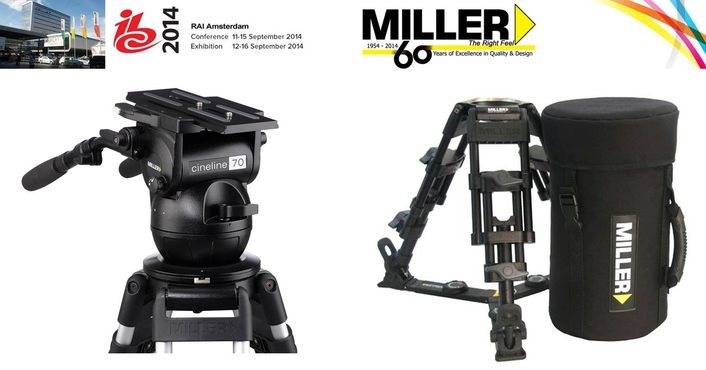 Leading Camera Support Company Introduces Cineline 70 Fluid Head to European Market
Miller Fluid Heads (Europe) Ltd., a leader in the production of innovating camera support solutions, reels with enthusiasm as it prepares for the European leg of its 60th anniversary celebration at IBC 2014 (Hall 11, Stand 11.D30). Continuing its professional progression in supplying the film and television industries with revolutionary high-end tripods and fluid heads, the Australia-based camera support solutions company will introduce its new Cineline 70 Fluid Head to the European market at the show.

“Since Miller’s launch 60 years prior, the company has delivered more than 100,000 tripods and fluid heads, acquired several patents and won numerous awards for its exceptional quality and design,” says Mike Lippmann, European manager, Miller Fluid Heads (Europe) Ltd. “We look forward to celebrating our 60th anniversary at IBC and are thrilled to be introducing our new Cineline 70 Fluid Head, with its smooth, advanced precision fluid drag control and perfect diagonal drag transition, to the European market.”

A family-founded company, Miller skyrocketed into a globally recognised brand shortly after father Eric Miller and his son, Bob, developed and patented the first fluid action head in 1946, which they designed to create smooth pans and tilts when shooting film in the field. Since its inception in 1954, Miller has been a pioneer in camera technology, revolutionising film and television by granting operators the freedom to shoot creatively and to obtain shots once deemed unattainable. Less than one year after the company’s commencement, the Miller Fluid Head made headlines when the New York Times reported that Miller was on the cusp of technological innovation. By 1958, Miller was exporting the heads worldwide, which included sending the first tripod to Hollywood, forever changing the landscape of cinematography. Today, Miller continues to stay true to its roots with the Cineline 70 Fluid Head, one of the company’s latest camera support solutions that is purpose-built for film and digital production cinematographers who desire a new dimension in professional camera support.

Constructed of corrosion-resistant alloy, the robust Cineline 70 Fluid Head is a feature-rich, cost-effective solution that is ideal for use on feature films, documentaries and high-end television commercial productions that require heavy payload, frequent re-rigging and a diverse range of lenses and cameras. For easy setup changes, its eight-position counterbalance system, with “all-in-one location” rear-mounted controls, easily allow users to capture the big picture. The fluid head also features an extended sliding range to promote quick and seamless rebalancing of the rig when changes in lenses and accessories result in weight distribution shifts. It is set to accommodate industry-leading camera mountings, including Arri, Sony, RED and Canon, and it features an Arri-compatible side-loading camera platform, with an optional, easy-to-fit 1225 Mitchell Base Adaptor to suit traditional Mitchell Flat Base tripods. Additionally, the fluid head offers dual side mounts for monitors and accessories.

Also on display at Miller’s IBC stand will be its compact Air and DS tripod systems, the multi-award winning Compass series, the industry stalwart Arrow series and the robust 150mm ball levelling Skyline 70 fluid head and tripod systems. The company will showcase its complete range of carbon fibre and alloy tripods, as well. Known to be the brand with “the right feel,” Miller will also display one of its new, limited special edition LP ’54 Classic tripods, built by hand as they were when first introduced, from remaining components left after the last production run of the Light Professional (LP), in celebration of the company’s 60th anniversary.

Miller is hosting a charitable raffle event at IBC 2014 (Hall 11, Stand 11.D30) to commemorate the company’s 60th anniversary. The family-founded, Australian-owned camera support equipment company will offer a champagne toast and announce the winner of a limited edition Miller LP ’54 Classic Tripod in an exclusive giveaway on Saturday, September 13, at 4:00pm. All proceeds from the raffle will be donated to the IABM Educational Foundation, which supports broadcast students interested in furthering their technical education. 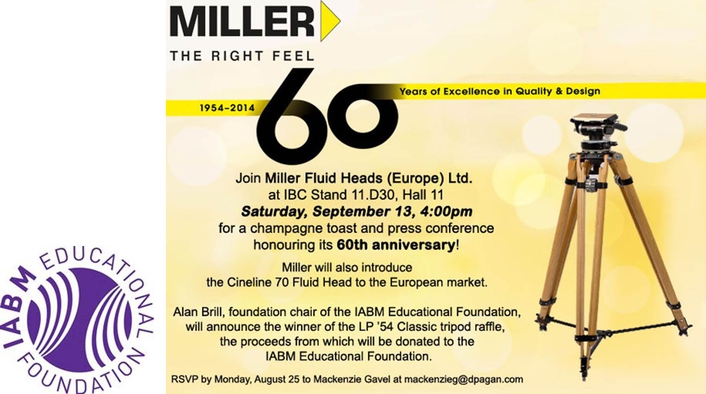 “We are honoured to partner with the IABM Educational Foundation at this year’s show, as the charity is committed in its efforts to advance engineering skills in broadcast and media technology on a global basis through education,” says Mike Lippmann, European Manager, Miller Fluid Heads (Europe) Ltd. “As a company that strives to continuously develop camera support solutions that help cameramen improve the way in which they capture imagery, Miller is committed to assisting the next generation of forward-thinking creators and fortifying the future of broadcasting through education. We are happy to raise money for the cause.”

The raffle is open to the public, and all participants are invited to purchase tickets leading up to IBC until 3:45pm on the day of the event. Tickets are available for purchase at https://www.justgiving.com/iabmeducationalfoundation/. Interested participants are asked to provide their first and family name when placing a donation in order to be eligible for a chance to win the unique LP ’54 Classic Tripod. Additionally, IBC attendees who enter the raffle are invited to collect their free Miller 60th anniversary camera plate locking key ring at Miller’s IBC Stand (Hall 11, Stand 11.D30).

At the culmination of the IBC celebratory event, IABM Foundation Chair Alan Brill will be in attendance on behalf of the IABM Educational Foundation to announce the name of one, lucky raffle winner who will walk away the owner of a brand new, limited edition Miller LP ’54 Classic Tripod, hand built, just as Miller tripods were when first introduced in 1954, from remaining components left after the last production run of the Light Professional (LP). Not available for purchase, only 40 of these rare, collector’s items were produced for worldwide distribution through donation in honour of Miller’s 60th anniversary. Each LP ’54 is numbered and comes with its own certificate of authentication and wooden encasement, crafted from the finest Australian Blackwood.

“It is a privilege to be the associated charity for Miller’s special 60th anniversary celebration at IBC,” says Roger Crumpton, director and trustee of the IABM Educational Foundation. “We are very appreciative to receive a donation that allows us to continue to support individuals worldwide who are interested in furthering their technical education to advance their careers in broadcast and media technology.”