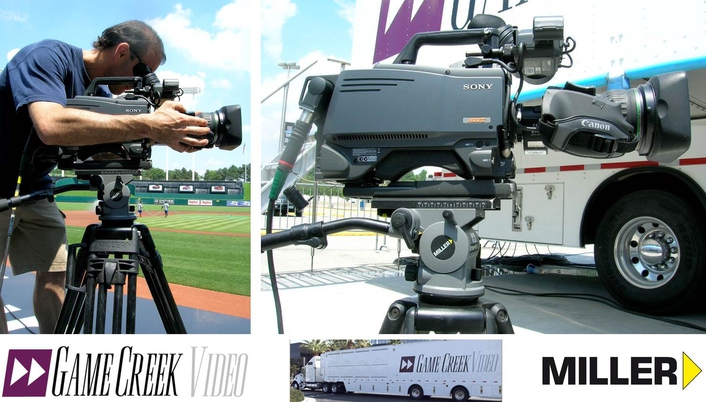 As a leader in the OB market, Game Creek Video strives to provide its customers with the industry’s best technical, logistical and production support in the market today. Paul Bonar, vice president of engineering, looks to supply each truck in the Game Creek Video fleet with state-of-the-art television technology to shoot cutting-edge video for high-profile live broadcasts.

A longtime member of the company’s video toolkit is the Arrow 55 2-Stage Carbon Fibre Tripod System by Miller Camera Support, LLC, a leader in the production of innovating camera support solutions. Currently, more than 100 tripod systems are in use in OB trucks in Game Creek’s fleet, ensuring that Game Creek Video doesn’t miss a moment of the action.

For the company’s 23-year history, Game Creek has been involved in the OB market, providing large-scale broadcast trucks for televised sporting events and concerts. Since the company’s inception, it has grown from two trucks to a fleet of 26 systems comprised of 51 trailers. Their clients consist of leading broadcasters such as FOX, ESPN, ABC, NBC, CBS as well as regional sports networks like YES, NESN, MSG, MASN, Comcast and many others. Bonar knew he needed to find an exceptional tripod system that could hold up throughout Game Creek’s rigorous production schedule across the country.

“We bought our first Miller Tripods in 2002 and they are still in use today, which is a testament to their durability,” says Bonar. “When it comes to the Arrow 55 2-Stage Carbon Fibre Tripod System, we have found that the operators like them. However, the real key for us is how reliable they are. I don’t have to think about the systems when the trucks are out. The operators never complain about them, so it’s a, ‘no news is good news’ type of situation.“

The durability that Bonar raves about is put to the test daily by production crews working on Game Creek trucks. “For example, on the first weekend in October we will have 23 OB systems working in 20 different states spanning from the East coast to the West coast.” Bonar says.  “We will be televising events like college and pro football as well as Baseball, NASCAR, WNBA, Soccer and Redbull Air Races.” This varied and full schedule means there is no time for failure.

Since Miller is relied upon day in and day out to shoot major televised sporting events, it is imperative that the Arrow 55 systems work in conjunction with Game Creek Video’s stock of Sony PMW-F55, HDC1500R, HDC2500L and HDC4300 cameras, or operators risk missing critical shots that are key to the broadcast.

The Arrow 55 Fluid Head offers the widest range of pan-and-tilt drag in the Arrow family, making it suited for long-lens applications such as studio EFP configurations. With a payload range of 22-55 lbs (10-25 kg), and 7+0 selectable pan-and-tilt drag positions, this fluid head is made for heavy duty purposes. It also includes a quick release 100mm sliding camera platform with a standard Euro camera plate, 100mm ball levelling mounting base and protected rear-mounted controls.

However, all of these specs mean nothing to Bonar without the Miller team supporting the product. “Miller’s very responsive to our needs,” he concludes. “In a rare occasion if we have to service a system they are quick to respond. However, those are few and far between.”

About Miller Camera Support Equipment
Founded in 1954, Miller Camera Support Equipment designs and manufactures professional fluid heads and tripods in Australia and delivers to the film and television industry, providing support for the world’s leading camera operators. Celebrating over sixty years in the industry, Miller is a longtime, global leader in the field of contemporary camera support and holds the first patent for fluid head design for film cameras, which it obtained in 1946. Today, Miller’s tripod and camera support systems are frequently used during electronic news gatherings (ENG), electronic field production (EFP), and digital video applications by the world’s leading networks, production houses, corporate, educational and government institutions in more than 65 countries.