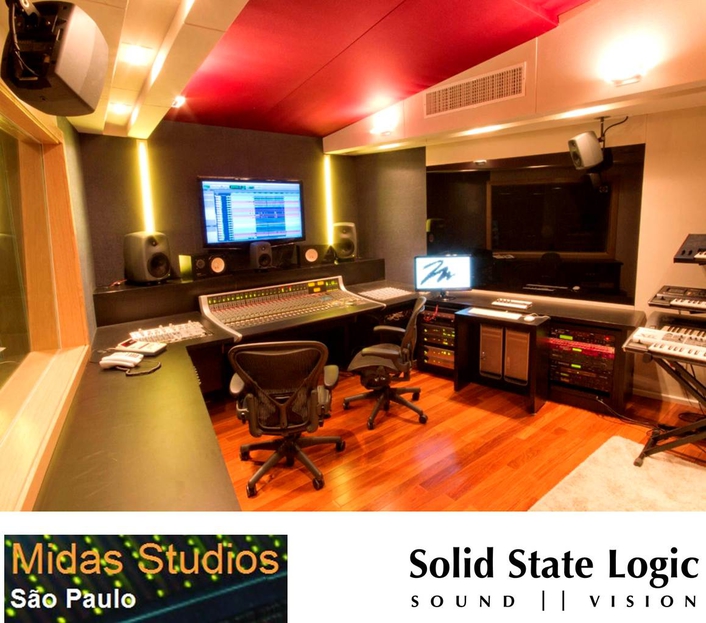 Midas Studios is the creative home for a multitude of Brazillian super-stars including Titãs, NX Zero, Charlie Brown Jr., Ira, Ivete Sangalo, Claudia Leite, Rita Lee and many others. The AWS 948 allows Studio 3 clients to capture performances that can be mixed into final releases. The console was chosen for the compact size, sterling sound quality and the capability to control the studio’s resident DAW platforms.

“The AWS has the great sound of a traditional analogue SSL with its mic pres and EQs, plus it offers an incredibly fast way of working and controlling digital,” says producer/composer Rick Bonadio, winner of seven Latin Grammy awards for production and engineering, and owner of Midas Studios, Arsenal Music and Music Midas record labels. “I have been using a special edition SSL 4000 G+ series in Studio 1 since 1998 with great success, so the move to the AWS was comfortable and uncomplicated for our engineers. SSL is a name that I can trust from sound to support and we are very happy to continue our relationship through the AWS.”

Midas Studios offers three studios on two stories with the newly renovated Studio 3 sharing space on the second floor with Studio 2. Originally designed to be a mastering suite and pre-production/composing room, Studio 3 now has an upgraded control room and studio room to bring it to the quality level of Studio 1.

“Midas is enjoying expanded demand from artists, composers and producers at all levels of the industry.” continues Bonadio “All major labels use these studios, so we needed to maximize the impact of Studio 3, and the AWS was definitely the way to go. The AWS allows us to expand the objectives of the space to include final quality recording and mixing, making our booking and workflow more efficient. Studio 3 can now offer world-class production and mixing because of the AWS.”

Studio 3 offers both Logic Pro 9 and Pro Tools® DAW platforms with all the support resources for digital recording and pre-production songwriting, including an SSL X-Rack, outboard mic pres, compressors and plug-ins. The AWS brings all the different elements together allowing the engineers to easily jump between different tasks.

“The great thing is that I use the studio for writing my projects using Logic 9 and I am not experiencing the engineering troubles I had in the past,” Bonadio explains. “With the old system, it was impossible to compose and mix simultaneously. Now with the AWS, I can control Logic from the console surface and go back to analogue to record guitars and vocals very quickly. The AWS has allowed my music creations to flow freely because I don’t have to stop all the time to deal with clicking a mouse when bouncing between recording and mixing. The AWS 948 is the ideal console for our purposes.”