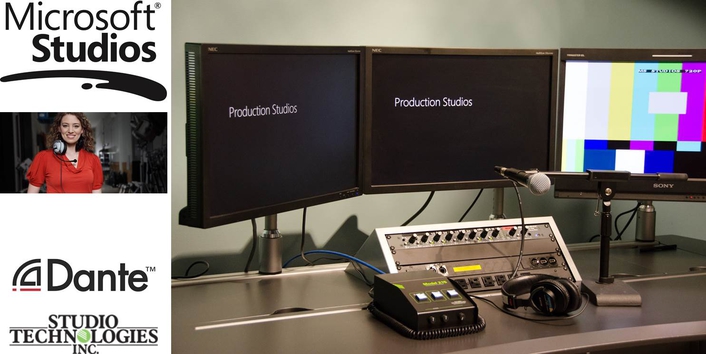 “Because GamesCom is primarily focused on a European audience, we needed to quickly produce interpretations of the American English Xbox LIVE production into Castilian and Latin American Spanish, French, Italian and German,” says John L. Ball, systems engineer for Microsoft Production Studios. “We had to figure out a way to produce the simultaneous interpretations within our existing facility space and, because the Model 215 Announcer’s Console is Dante-compatible, we could literally plug each unit into an available space and begin producing the live streaming broadcast instantaneously. The Model 215s worked perfectly, set up quickly and provided great audio quality.”

Ball and his team set up Microsoft Production Studios’ main studio room, which boasts a Dante-based infrastructure, to broadcast the English language edition of the streaming show. Since all the room’s audio equipment was able to connect to any Dante-enabled device, Microsoft Production Studios’ video editing suites were then transformed into temporary voice-over rooms for the translating staff.

“The entire process was quite amazing from a technical perspective,” adds Ball. “We simply took the Model 215s into the different rooms, plugged them into the existing Ethernet network, made the appropriate routing through Audinate’s Dante Controller software application, and we were up and running in all five rooms in less than 30 minutes. It saved us a day’s worth of setup compared to running discrete analog audio lines. With Dante and the Model 215s, we could deliver the English version into the headsets of the interpreters and they, in turn, could quickly translate the audio and feed the content into the microphone plugged into the Model 215 that was connected to our network. We did not miss a beat and the worldwide Xbox community thoroughly enjoyed the production.”

About Studio Technologies, Inc.
Studio Technologies, Inc. provides tailored, high-performance video, audio and fiber optic products for the professional audio and broadcast markets. The company was founded in 1978 with a commitment to design and manufacture dependable, individualized solutions for broadcast studio, stadium and corporate environments. Known for “designing for the way professionals work,” the company is recognized as an industry leader that has never wavered from its individualized design pledge. Product categories include fiber-optic transport, broadcast support, mobile broadcast, intercom and IFB, announcer consoles, and loudspeaker monitor control systems.