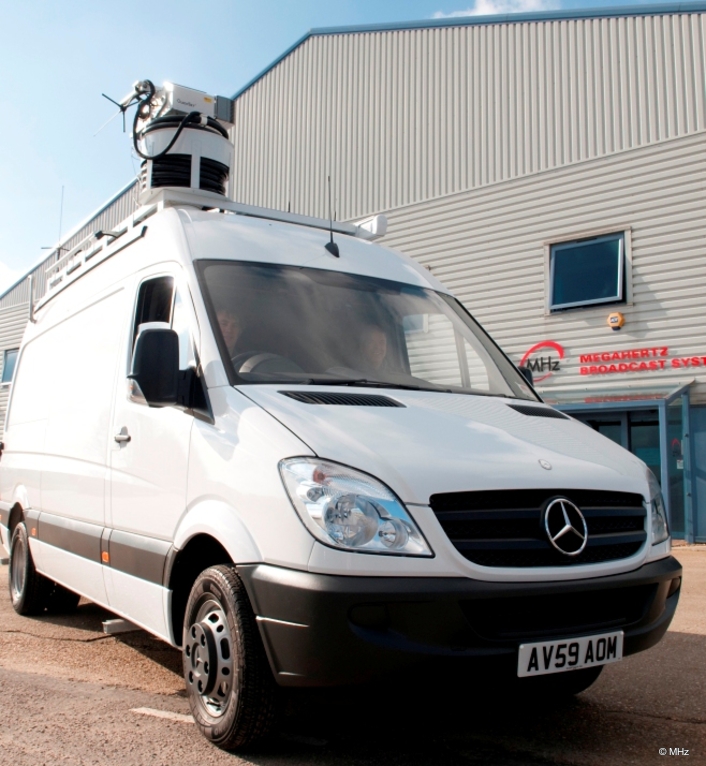 ITN links vehicle
Megahertz (MHz), a leading independent international systems integrator, has announced that the latest MHz-built ITN links vehicle has hit the road providing additional news gathering facilities to its existing fleet. The vehicle which includes a fully integrated, HD-compliant infrastructure is expected to be used on a number of live news productions including coverage of the upcoming UK parliamentary elections.

“We are delighted with the capabilities of the links vehicle since it came off the MHz production line and it has been used on a number of key news stories since including the BA strike and a premiere in Leicester Square where it has performed well,” said Malcolm Smith, head of newsgathering operations at ITN. “MHz worked closely with our engineering teams to design the layout and develop the specification for the equipment that would deliver the highest production values that we demand at ITN whilst considering the operational needs within a space-constrained setting — and doing so on time and within budget.”

The primary role of the vehicle is to deliver live news content from story locations via radio link. However the vehicle has also been equipped with the additional facilities needed to enable ITN to anchor news bulletins from major story locations around the UK.

“We have had a very strong relationship with ITN for many years — and in that time have built a number of news vehicles for them. We worked closely with the ITN team on this project to define the truck design that would ensure operational excellence on the road — and this has been achieved,” said Robert Stopford, Sales Director of Megahertz. “In fact MHz has delivered a truck that could withstand the rigours of demanding news while at the same time achieving the cost-efficiencies and improved productivity levels they required.” 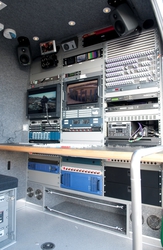 This new links vehicle will initially be used for standard-definition newsgathering albeit that it has an HD-ready infrastructure installed. Based on a 5 Ton Mercedes Sprinter, the vehicle includes an on-board 8kVA Fischer Panda diesel generator, together with batteries and inverter for emergency power should this be required in the field. It is equipped with two pneumatic masts — one will support a terrestrial microwave link while the other will be mounted with a panoramic camera, both on pan & tilt heads. Feeds coming into the truck will originate from radio link cameras and fibre cameras while further inputs can be directed via on-board VTRs routed through a For-A vision mixer and an Allen & Heath audio mixer.

Part of the AZCAR Group, one of the worlds largest and longest-established independent broadcast systems integrators, MHz plays a significant role in designing and delivering innovative solutions to the world’s leading broadcasters, telecommunication and digital media companies.

ITN is one of the world's leading news and multimedia content companies creating, packaging and distributing news, entertainment, factual and corporate content on multiple platforms to customers around the globe. The news programming produced for ITV and Channel 4 reaches nearly 10 million people every day, providing comprehensive, impartial news provision for the British public. ITN's news is also watched by millions of viewers worldwide, through partnerships with global news outlets such as Reuters, CNN and NBC and online partners such as Livestation, YouTube and MSN. As well as providing television news ITN operates three other divisions: footage sales arm ITN Source; video creation business ITN Productions; and advisory services from ITN Consulting & New Ventures.

Established in 1984, UK-based Megahertz Broadcast Systems is one of the world’s premier independent broadcasting systems integrators. Their experience covers every aspect of systems implementation from engineering planning, project management, design, product evaluation, commissioning, training, support and IT services. MHz has completed turnkey projects for some of the world’s leading broadcasters, telecommunication and digital media companies. It has constructed sophisticated fixed HD broadcast facilities as well as providing the “best of breed” Outside Broadcast Vehicles. Megahertz is a subsidiary of Canadian technology integration company, AZCAR Technologies Incorporated.