The move to 64bit operating system unleashes the full power of MassCore
Merging previewed Pyramix 9 at the Prolight+Sound exhibition in Frankfurt and showed the final version at NAB earlier this month. Last year’s release of Pyramix 8.0 and 8.1 brought a host of new recording features and full RAVENNA connectivity. Pyramix 9 addresses performance and operational enhancements plus new plug-in options and interfacing improvements.

In 2007, the MassCore engine provided Pyramix software users with the most powerful audio engine in the world. Capable of 384 discrete inputs and 384 discrete outputs, 256 busses and almost limitless power for plug-ins, MassCore has always provided the ultimate “mix in the box” solution. But now, after some 7 years of using “hidden” cores in a multi-core CPU to generate immense processing power and the industry’s lowest latencies, MassCore remains ahead of the game and the addition of 64bit performance with Pyramix 9 moves it to another level. MassCore Unchained.

New Features in Pyramix 9:
64bit MassCore Engine
The issue with running something as advanced as MassCore in a 32bit operating system was that there was simply never the performance to take full advantage of the audio engine’s capability for the most memory-hungry projects of some users. With 64bit, Pyramix’s true real-time operation is now able to span not only hundreds of tracks, but also projects that can contain more edits, more automation, more plug-ins and span greater lengths than ever before.

New Mixer
The main addition to the new mixer is the Signal Flow view of the metering. Now, with any strip, or range of strips selected, the user can instantly see where the signal is routed to by a slight colour change in the peak meters. Then, with a simple click, the user can collapse the view of the entire mixer so that it only shows those strips and busses being used for the part of the mix that has been selected. Additional updates include automation modes per strip, peak metering in the auxes and subgroup sends and much more visible strip colouring. 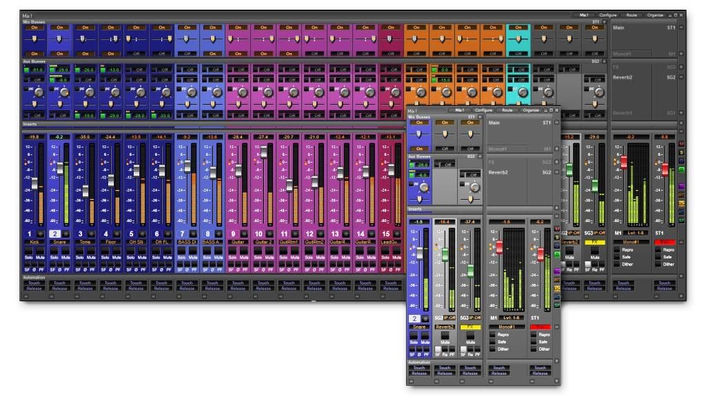 Mixdown: Loudness Logging and Fix Tools
You can now mixdown multiple busses at once and create a separate interleaved file for each one.  At the same time, users can now enable Final Check loudness checking and “fix” to make sure that your final broadcast masters will comply with loudness regulations in your territory (such as EBU R128 in Europe). Naturally, Pyramix mixdown is still faster than realtime.

New VS3 and VST plug-ins for 64bit
Headed by a significantly expanded range of VS3 plug-ins from Flux, many exciting new 64bit programs are available for recording, post-production, mastering and restoration.   With more suppliers moving to 64bit in the near future, this list will expand rapidly.

ISRC Code in BWF Support
Merging was one of the first of the major mastering systems to support the EBU recommendation for embedding ISRC data in Broadcast Wave Files (EBU Tech 3352).  This simple way to ensure that the correct metadata accompanies the audio is endorsed by the UK Music Producers Guild. Although this was included in Pyramix 8.1, the recent live streaming of the MPG meeting in London in early April reminded attendees that this is also part of Pyramix 9.

RAVENNA is a technology for real-time distribution of audio and other media content in IP-based network environments. Utilizing standardized network protocols and technologies, RAVENNA can operate on existing network infrastructures. RAVENNA is designed to meet the strict requirements of the pro audio market featuring low latency, full signal transparency and high reliability and is fully AES67 compatible. With a capacity of nearly 8 x MADI streams over a single Gigabit Ethernet link, it is also the first and only Layer-3 based IP audio protocol with full support for high-channel count DXD and DSD signals.