.
Megahertz (MHz), the UK-based independent systems integrator, has delivered a high definition outside broadcast unit to Cyprus Broadcasting Corporation (CyBC). The unit is designed to be highly resilient, both against power failure and the high temperatures experienced on the island in summer.

The unit is based on a fixed-axle Mercedes truck with coach-building by Spectra in the UK as part of the MHz contract. The vehicle has a single expanding side along its full 12m length to provide space for replay operators in the main production area. The separate audio area has provision for 5.1 channel surround sound to match the HD vision capabilities, including a Studer mixer.

The truck is equipped with 12 Grass Valley cameras, including two super slo-mo cameras and two with wireless links. The cabled cameras are connected by triax, and motorised cable drums are fitted at the rear of the truck to speed rigging and de-rigging. The production switcher is by Ross, with router, interface products and multiviewers from Evertz and graphics from Chyron.

Originally built to cover events during Cyprus’s presidency of the European Union, the unit now covers sport and entertainment events all over the island, including locations where the available power is unreliable. To maintain critical equipment should power fail, the truck is equipped with an 8kVA UPS, and the tender vehicle (also supplied by Megahertz) contains a 110kVA, three-phase diesel generator capable of powering the complete system if required. 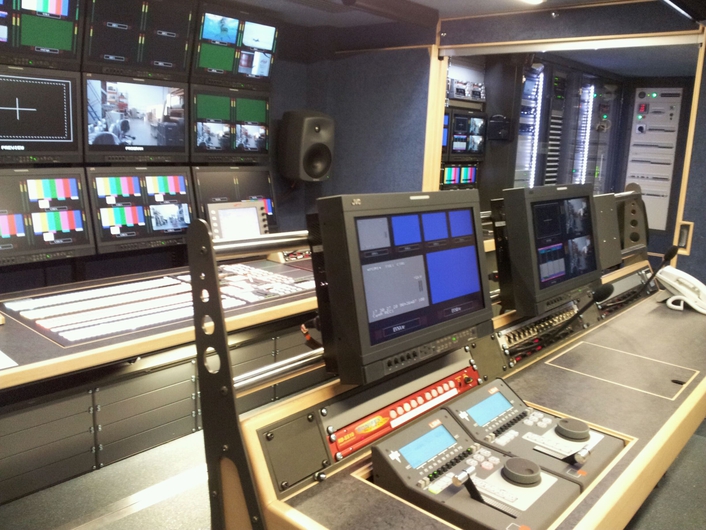 It is important to keep the crew comfortable during summer temperatures, which can exceed 40˚. The vehicle was built with a high level of insulation to prove natural protection, and a custom-designed Daikin air conditioning system was installed, with multiple compressors to provide redundancy and ensure reliable cooling. 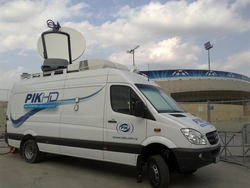 “We ordered an SNG truck from Megahertz in 2011, which was delivered on time and on budget and has worked precisely to our requirements,” said Yioula Kyriacou, Head of Radio and TV Studios, Cyprus Broadcasting Corporation. “We had no hesitation in returning to Megahertz for our HD outside broadcast unit. They proved extremely helpful and supportive through the design, delivery and training process and the new truck has proved a great addition to our facilities.”

“Every outside broadcast unit we build is different,” said Steve Burgess, technical director of MHz. “It has to reflect not only broadcast requirements but the environments in which it will be used. Our depth of experience in designing and building trucks means we know which questions to ask, and how to solve the technical challenges of incorporating all those requirements into the vehicle. This project for CyBC was a great example of fitting technically extremely agile capabilities and excellent resilience into a fixed axle vehicle suitable for use on Cyprus roads.”

About Megahertz Broadcast Systems
Megahertz Broadcast Systems, a KIT digital company, is a leading independent broadcast systems integrator. Its highly experienced engineering team provide a complete service from engineering planning and design through product evaluation and project management to commissioning, training and support. The team is as adept at file-based architectures as it is in traditional broadcast infrastructures. Recently completed projects include outside broadcast vehicles, high definition studios, playout facilities and earth stations, as well as audio visual installations for applications as varied as mosques and the London Stock Exchange.